Articoli correlati a Icon: Steve Jobs, The Greatest Second Act in the History...

Icon: Steve Jobs, The Greatest Second Act in the History of Business 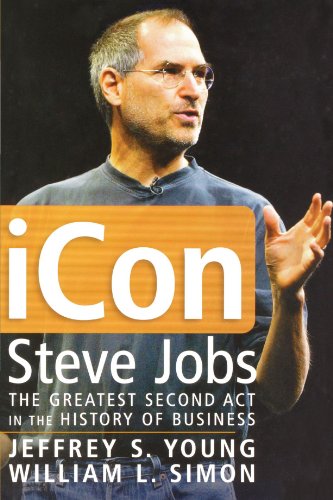 iCon takes a look at the most astounding figure in a business era noted for its mavericks, oddballs, and iconoclasts. Drawing on a wide range of sources, Jeffrey Young and William Simon provide new perspectives on the legendary creation of Apple, detail Jobs’s meteoric rise, and the devastating plunge that left him not only out of Apple, but out of the computer-making business entirely. This unflinching and completely unauthorized portrait reveals both sides of Jobs’s role in the remarkable rise of the Pixar animation studio, also re-creates the acrimony between Jobs and Disney’s Michael Eisner, and examines Jobs’s dramatic his rise from the ashes with his recapture of Apple. The authors examine the takeover and Jobs’s reinvention of the company with the popular iMac and his transformation of the industry with the revolutionary iPod. iCon is must reading for anyone who wants to understand how the modern digital age has been formed, shaped, and refined by the most influential figure of the age–a master of three industries: movies, music, and computers.

JEFFREY S. YOUNG, one of the founding editors of Macworld magazine, first met Steve Jobs in 1983. He is the author of the classic unauthorized biography Steve Jobs: The Journey Is the Reward. Young worked for Forbes in the 1990s as its contributing editor from Silicon Valley, writing profiles and business pieces, and, in 1997, he cofounded Forbes.com. He is also the author of Forbes® Greatest Technology Stories (Wiley).

WILLIAM L. SIMON is the coauthor of Kevin Mitnick's The Art of Deception and The Art of Intrusion (both published by Wiley) as well as the award-winning author of more than twenty other books.

Now updated to cover the acquisition of Pixar by Disney

"An interesting and engaging tale. Warts and all, for better or worse, Steve Jobs is undisputedly an American business icon."
?The Miami Herald

This unflinching and completely unauthorized portrait reveals how Steve Jobs staged the greatest second act in the history of business. Taking us back to the heady days of Silicon Valley in the 1970s, iCon shows how Jobs achieved his first great success, rising from an outcast high school electronics nerd to become the driving force behind Apple and avatar of the computer revolution, only to be driven from the company in failure and disgrace. It then takes us behind-the-scenes as Jobs works his way toward an astounding comeback, revolutionizing the entertainment industry with Pixar, reclaiming the throne at Apple, and, with the extraordinary success of the iPod, regaining his reputation as arguably the greatest innovator of the digital age. As the book ends, Disney has just acquired Pixar, making Jobs Disney's largest shareholder?and setting the stage for act three.

"A fascinating tale of an imaginative genius."
?BookPage

"One of the most captivating business biographies of recent years. Young and Simon have done a masterful job."
?Fort Worth Star-Telegram

1. iCon Steve Jobs: The Greatest Second Act in the History of Business

2. iCon Steve Jobs: The Greatest Second Act in the History of Business

3. iCon Steve Jobs: The Greatest Second Act in the History of Business

4. iCon Steve Jobs: The Greatest Second Act in the History of Business