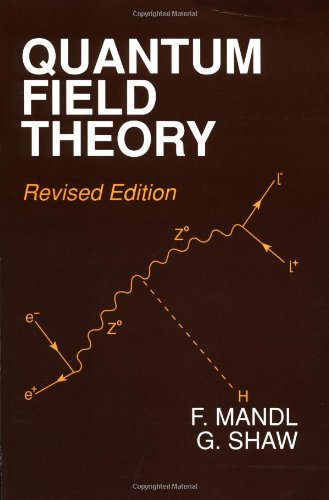 Quantum Field Theory Revised Edition F. Mandl and G. Shaw, Department of Theoretical Physics, The Schuster Laboratory, The University, Manchester, UK When this book first appeared in 1984, only a handful of W?? and Z? bosons had been observed and the experimental investigation of high energy electro-weak interactions was in its infancy. Nowadays, W?? bosons and especially Z? bosons can be produced by the thousand and the study of their properties is a precise science. We have revised the text of the later chapters to incorporate these developments and discuss their implications. We have also taken this opportunity to update the references throughout and to make some improvements in the treatment of dimen-sional regularization. Finally, we have corrected some minor errors and are grateful to various people for pointing these out. This book is designed as a short and simple introduction to quantum field theory for students beginning research in theoretical and experimental physics. The three main objectives are to explain the basic physics and formalism of quantum field theory, to make the reader fully proficient in theory calculations using Feynman diagrams, and to introduce the reader to gauge theories, which play such a central role in elementary particle physics. The theory is applied to quantum electrodynamics (QED), where quantum field theory had its early triumphs, and to weak interactions where the standard electro-weak theory has had many impressive successes. The treatment is based on the canonical quantization method, because readers will be familiar with this, because it brings out lucidly the connection between invariance and conservation laws, and because it leads directly to the Feynman diagram techniques which are so important in many branches of physics. In order to help inexperienced research students grasp the meaning of the theory and learn to handle it confidently, the mathematical formalism is developed from first principles, its physical interpretation is stressed at every point and its use is illustrated in detailed applications. After studying this book, the reader should be able to calculate any process in lowest order of perturbation theory for both QED and the standard electro-weak theory, and in addition, calculate lowest order radiative corrections in QED using the powerful technique of dimensional regularization. Contents: Preface; 1 Photons and electromagnetic field; 2 Lagrangian field theory; 3 The Klein--Gordon field; 4 The Dirac field; 5 Photons: covariant theory; 6 The S-matrix expansion; 7 Feynman diagrams and rules in QED; 8 QED processes in lowest order; 9 Radiative corrections; 10 Regularization; 11 Weak interactions; 13 Spontaneous symmetry breaking; 14 The standard electro-weak theory; Appendix A The Dirac equation; Appendix B Feynman rules and formulae for perturbation theory; Index.

"...designed as a short and simple introduction to quantum field theory for students beginning research in theoretical and experimental analysis." (Zentralblatt MATH, Vol. 972, 2001/22)