Articoli correlati a The Exact Sciences in Antiquity

The Exact Sciences in Antiquity 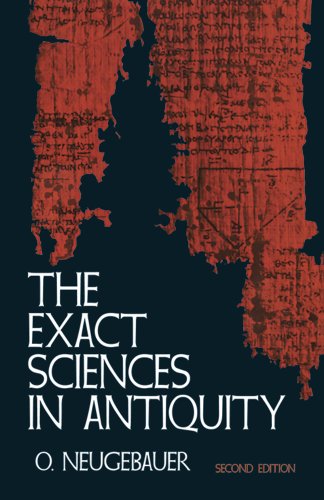 Based on a series of lectures delivered at Cornell University in the fall of 1949, and since revised, this is the standard non-technical coverage of Egyptian and Babylonian mathematics and astronomy, and their transmission to the Hellenistic world. Entirely modern in its data and conclusions, it reveals the surprising sophistication of certain areas of early science, particularly Babylonian mathematics.
After a discussion of the number systems used in the ancient Near East (contrasting the Egyptian method of additive computations with unit fractions and Babylonian place values), Dr. Neugebauer covers Babylonian tables for numerical computation, approximations of the square root of 2 (with implications that the Pythagorean Theorem was known more than a thousand years before Pythagoras), Pythagorean numbers, quadratic equations with two unknowns, special cases of logarithms and various other algebraic and geometric cases. Babylonian strength in algebraic and numerical work reveals a level of mathematical development in many aspects comparable to the mathematics of the early Renaissance in Europe. This is in contrast to the relatively primitive Egyptian mathematics. In the realm of astronomy, too, Dr. Neugebauer describes an unexpected sophistication, which is interpreted less as the result of millennia of observations (as used to be the interpretation) than as a competent mathematical apparatus. The transmission of this early science and its further development in Hellenistic times is also described. An Appendix discusses certain aspects of Greek astronomy and the indebtedness of the Copernican system to Ptolemaic and Islamic methods.
Dr. Neugebauer has long enjoyed an international reputation as one of the foremost workers in the area of premodern science. Many of his discoveries have revolutionized earlier understandings. In this volume he presents a non-technical survey, with much material unique on this level, which can be read with great profit by all interested in the history of science or history of culture.

Otto Neugebauer: Exacting History
Neugebauer's The Exact Sciences in Antiquity became an instant unique classic of scientific literature when first published in 1951 in the United States and in Copenhagen where he had lived and worked for some years after having been forced out of Germany because of his opposition to National Socialism. At the start of World War II, Otto Neugebauer (1899–1990) left Europe for Brown University where he founded the History of Mathematics Department. Years later a colleague at Brown recalled Neugebauer's eloquent summary of the dark years in Germany: "If you never heard the sound of Nazi boots below you in the street, you cannot understand the history of the period."

Critical Acclaim for Otto Neugebauer:
"Otto Neugebauer was the most original and productive scholar of the history of the exact sciences, perhaps of the history of science, of our age. He began as a mathematician, turned first to Egyptian and Babylonian mathematics, and then took up the history of mathematical astronomy, to which he afterward devoted the greatest part of his attention. In a career of sixty-five years, he to a great extent created our understanding of mathematical astronomy from Babylon and Egypt, through Greco-Roman antiquity, to India, Islam, and Europe of the Middle Ages and Renaissance. Through his colleagues, students, and many readers, his influence on the study of the history of the exact sciences remains profound, even definitive." ― N. M. Swerdlow

1. The Exact Sciences in Antiquity

2. The Exact Sciences in Antiquity

3. The Exact Sciences in Antiquity

4. THE EXACT SCIENCES IN ANTIQUITY

5. THE EXACT SCIENCES IN ANTIQUITY