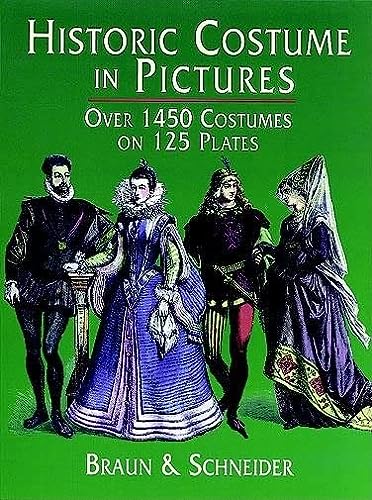 From 1861 to 1890 the Munich publishing firm of Braun & Schneider published plates of historic and contemporary costume in their magazine Münchener Bilderbogen. These plates were eventually collected in book form and published at the turn of the century in Germany and England. This volume presents all 125 double-spread plates from the third English edition. For the first time, the plates appear in chronological order and with English captions.
Over 1,450 costumed figures are shown, from antiquity to the end of the nineteenth century, covering a wide variety of social classes, and professions: Egyptian and Assyrian kings, Byzantine emperors, Frankish and Norman nobles, priests, servants, soldiers of many lands and eras, crusaders, German knights, pages, Italian scholars, German townspeople, peasants, merchants, Dutch burghers, popes, nuns, bishops, monks, English Puritans and Cavaliers, English and French kings, Swiss citizens, French courtiers and republicans, and many more. In addition, there is excellent coverage of late-nineteenth-century folk and their costumes, captured just before the beginning of standard Western dress — Italian, Spanish, Dutch, French, German, Russian, Eastern European, Chinese, Japanese, Asian, and others. To avoid the variable and somewhat fanciful depictions of color in the early editions, all costumes are rendered in black-and-white.
A comprehensive source of historic costume in pictures, this remarkable book will be invaluable to costume designers, students of fashion design, commercial artists, and anyone interested in the history of dress. The illustrations are uniformly excellent, and the exceptionally low price makes this book even more attractive.