Articoli correlati a Physics and Philosophy 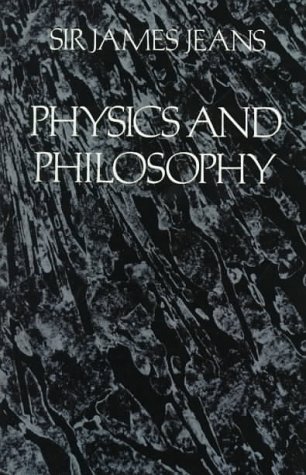 A noted scientist illuminates the intertwined paths of philosophy and science from Plato to the present, and examines the transition from Newtonian classical mechanics to modern relativistic physics.

Sir James Jeans: Science Made Simple
Sir James Jeans (1877–1946), English physicist, astronomer, and mathematician, made substantial contributions to many areas of science including quantum theory, the theory of radiation, and stellar evolution, but is most remembered today for several elegantly written books on science and its meaning for the general reader. Among these are the classics Physics and Philosophy, published by Dover in 1981, and Science and Music, published by Dover in 1968.

In the Author's Own Words:
"Put three grains of sand inside a vast cathedral, and the cathedral will be more closely packed with sand than space is with stars."

"Life exists in the universe only because the carbon atom possesses certain exceptional properties."

"The human race, whose intelligence dates back only a single tick of the astronomical clock, could hardly hope to understand so soon what it all means."

From Physics and Philosophy:
"Science usually advances by a succession of small steps, through a fog in which even the most keen-sighted explorer can seldom see more than a few paces ahead. Occasionally the fog lifts, an eminence is gained, and a wider stretch of territory can be surveyed — sometimes with startling results. A whole science may then seem to undergo a kaleidoscopic rearrangement, fragments of knowledge sometimes being found to fit together in a hitherto unsuspected manner. Sometimes the shock of readjustment may spread to other sciences; sometimes it may divert the whole current of human thought."

I. What are Physics and Philosophy? II. How do we know? (Descartes to Kant; Eddington) III. The two voices of Science and Philosophy (Plato to the present) IV. The Passing of the Mechanical Age (Newton to Einstein) V. "The New Physics (Planck, Rutherford, Bohr)" VI. "From Appearance to Reality (Bohr, Heisenberg, de Broglie, Schrödinger, Dirac)" VII. Some Problems of Philosophy Index