Articoli correlati a The Theory of Sound: 001 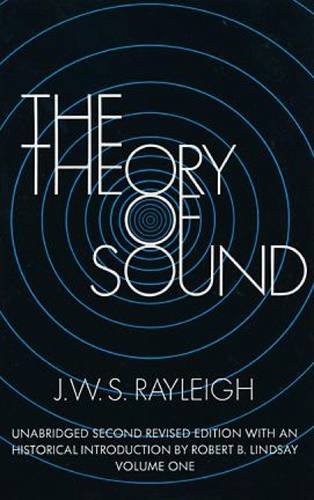 "An outstanding treatise." — Review of Scientific Instruments
"Astonishing how this treatise ... still retains a place of preeminence in modern acoustical literature." — Electronics Industry
The major work by a Nobel Laureate who was among the greatest of 19th-century physicists is a standard compendium which has served generations of acousticians, physicists, and mathematical physicists as the classic coverage of all aspects of sound, both experimental and theoretical.
The book sums up previous research and offers original contributions of Lord Rayleigh. It is, therefore, not only a reference book, but a book of great practical utility for all readers concerned with scientific aspects of sound. Volume 1 covers harmonic vibrations, systems with one degree of freedom, vibrating systems in general, transverse vibrations of strings, longitudinal and torsional vibrations of bars, vibrations of membranes and plates, curved shells and plates, and electrical vibrations. Volume II covers aerial vibrations, vibrations in tubes, reflection and refraction of plane waves, general equations, theory of resonators, Laplace's functions and acoustics, spherical sheets of air, vibration of solid bodies, and facts and theories of audition.

J. W. S. Rayleigh: Acoustically Speaking
It is an indication of the vast range and scope of the scientific work produced by John William Strutt, 3rd Baron Rayleigh (1842–1919) that his foundational work on vibrations and sound doesn't figure in any way in the official citation which accompanied his Nobel Prize in Physics in 1904, awarded ". . . for his investigations of the densities of the most important gases and for his discovery of argon in connection with these studies."

His life's work as a physicist (there are 446 scientific papers published in his Collected Works) covers fields as diverse as optics, vibrating systems, sound, wave theory, electrodynamics and electromagnetism, light scattering (he explained the atmospheric scattering effects which are responsible for the fact that the sky is blue), hydrodynamics, elasticity and magnetism, and many other areas. Dover's 1945 two-volume reprint of The Theory of Sound, first published in England in 1877–78, was the first to make this work widely available to students and scholars. It is still widely cited by acoustical researchers today.

In the Author's Own Words:
"As a general rule we shall confine ourselves to those classes of vibrations for which our ears afford a ready made and wonderfully sensitive instrument of investigation. Without ears we should hardly care much more about vibrations than without eyes we should care about light."

"Examples . . . show how difficult it often is for an experimenter to interpret his results without the aid of mathematics." ― J. W. S. Rayleigh

The Theory of Sound, Volume One: Unabridged Second Revised Edition

The Theory of Sound

The Theory of Sound, Volume One: Unabridged Second Revised Edition

The Theory of Sound, Vol 1

The Theory of Sound, Vol 1