Articoli correlati a Caravans to Tartary 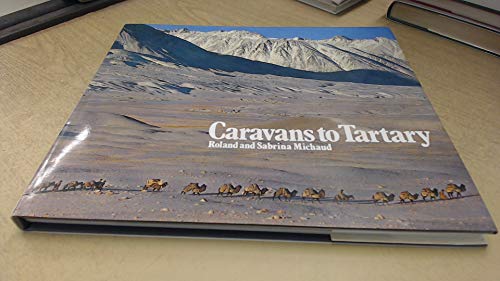 Descrizione libro Thames & Hudson Ltd with The Art Institute of Chicago, London, 1978. Hardback. Condizione: Fine. Condizione sovraccoperta: Fine. First Edition. This fine unmarked copy is bound in blue cloth covered boards with bright gilt titling to the spine and Thames & Hudson colophon to the upper board, tight, white, bright and square. The unclipped dust wrapper is in fine condition. International postal rates are calculated on a book weighing 1 Kilo, in cases where the book weighs less then postage will be reduced accordingly. Where the book weighs more than 1 Kilo increased charges will be quoted. Roland and Sabrina Michaud spent 14 years wandering around Afghanistan before the Russian invasion and subsequent series of wars put an end to their travels. They must have taken a huge number of photographs, trying to preserve on film ways of life and the ancient landscape that was doomed to disappear under the guns of late 20th century wars. Those wars continue. Once, they took a trip with five Kirghiz camel drivers and their 17 camels up the Wakhan corridor--a strip of land separating the USSR from Pakistan and touching China. They also haunted the bazaars, the oases, the hills and valleys of northern Afghanistan, searching for the picturesque, the exotic, and the soul of peoples whose lives would soon be transformed. They took excellent pictures of everything. Ref O1 Size: 76pp 31cms Wide By 21cms Tall. Codice articolo 021308

Descrizione libro Thames and Hudson, 1978. Condizione: Good. A+ Customer service! Satisfaction Guaranteed! Book is in Used-Good condition. Pages and cover are clean and intact. Used items may not include supplementary materials such as CDs or access codes. May show signs of minor shelf wear and contain limited notes and highlighting. Codice articolo 0500540535-2-4