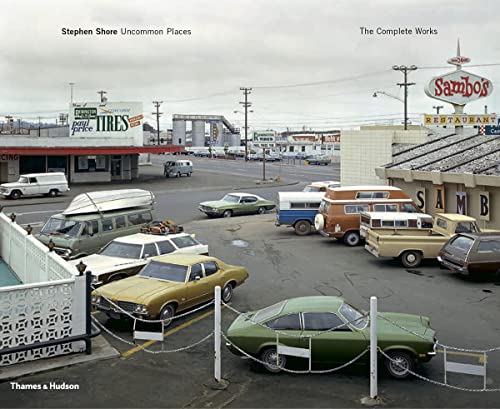 Originally published in 1982, Stephen Shore's legendary Uncommon Places has influenced a generation of photographers. Among the first artists to take colour beyond the domain of advertising and fashion photography, Shore's large-format colour work on the American vernacular landscape stands at the root of what has become a vital photographic tradition over the past thirty years. Uncommon Places: The Complete Works is the definitive collection of this landmark series. An essay by noted critic and curator Stephan Schmidt-Wulffen and a conversation with Shore by fiction writer Lynne Tillman examine his methodology as they elucidate his roots in the pop and conceptual art movements of the late sixties and early seventies. The texts are illustrated with reproductions from Shore's earlier series American Surfaces and Amarillo: Tall in Texas.

Shore gets his own wonderful treatment in Uncommon Places which republishes his 1982 series of the same name in its entirety. These quiet images of a vernacular American landscape have had legions of fledgling photographers trailing in his wake. --Daily Telegraph

The legacy of Stephen Shore's Uncommon Places cannot be overstated ... this updated edition features 15 previously unseen images and includes discussions with the artist, offering readers insight into what it means to produce - and update - such an enduring legacy. --The Year's Best Books, Amateur Photographer

This updated edition features 15 previously unseen images and includes discussions with the artist, offering insight into what it means to produce - and update - an enduring legacy. --What Digital Camera

High quality ... The 70s was arguably one of the most fascinating times in US motoring and this is wonderfully captured here. --Practical Classics

The new edition of this seminal photo book is sure to inspire another generation of photographers. --Outdoor Photography