Howse, Derek A Buccaneer's Atlas: Basil Rinrose's South Sea Waggoner : A Sea Atlas and Sailing Directions of the Pacific Coast of the Americas, 1682

A Buccaneer's Atlas: Basil Rinrose's South Sea Waggoner : A Sea Atlas and Sailing Directions of the Pacific Coast of the Americas, 1682 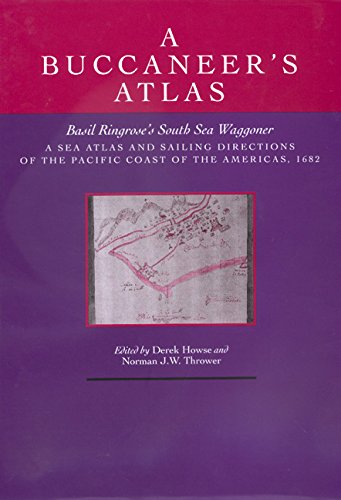 On July 29, 1681, a band of English buccaneers that had been terrorizing Spanish possessions on the west coast of the Americas captured a Spanish ship, from which they obtained aderrotero, or book of charts and sailing directions. When they arrived back in England, the Spanish ambassador demanded that the buccaneers be brought to trial. Thederrotero was ordered to be brought to King Charles II, who apparently appreciated its great intelligence value. The buccaneers were acquitted, to the chagrin of the king of Spain, who had the English ambassador expelled from the court at Madrid on a seemingly trumped-up charge.

The derrotero was subsequently translated, and one of the buccaneers, Basil Ringrose, added a text to the compilation and information to the Spanish charts. The resulting atlas, consisting of 106 pages of charts and 106 pages of text, is published in full for the first time in this volume. Covering the coast from California to Tierra del Fuego, the Galapagos, and Juan Fernandes, Basil Ringrose's south sea waggoner is a rich source of geographical information, with observations on navigational, physical, biological, and cultural features as well as on ethnography, customs, and folklore.

After almost exactly three hundred years, this secret atlas is now made available to libraries and individuals. The editors have provided an extensive introduction on historical, geographical, and navigational aspects of the atlas, as well as annotations to the charts and text, and they have plotted the coverage of the charts on modern map bases.

Derek Howse retired from the Royal Navy as a Lieutenant Commander in 1958 and later became Head of Navigation and Astronomy at the National Maritime Museum in Greenwich, England. Among his books areThe Sea Chart (1973) and Greenwich Time and the Discovery of the Longitude (1980).Norman J. W. Thrower is Professor of Geography and former Director of the Clark Library at the University of California at Los Angeles. He is the author ofThe Three Voyages of Edmond Hawlley in the "Paramore," 1698-1701 and editor ofSir Francis Drake and the Famous Voyage (California, 1984), among many other books.