Articoli correlati a ABC of Influence: Ezra Pound and the Remaking of American...

ABC of Influence: Ezra Pound and the Remaking of American Poetic Tradition 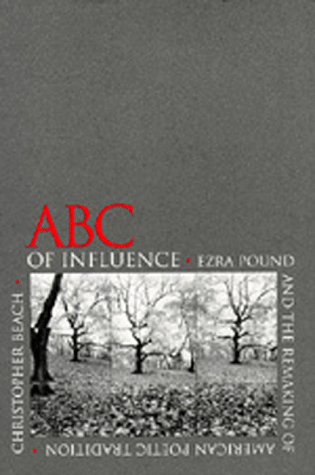 In this first full-length study of Pound's influence on American poetry after World War II, Beach argues that Pound's experimental mode created a new tradition of poetic writing in America. Often neglected by academic critics and excluded from the "canon" of American poetic writing, Charles Olson, Robert Duncan, and later members of this experimental tradition have maintained the sense of an American avant garde in keeping with Pound's modernist experiments of the 1910s and 1920s. The work of these poets has served as a counterforce to the established traditions of the "American Sublime" and the Anglo-American formalism represented by T. S. Eliot and the New Criticism.

ABC of Influence challenges previous discussions of poetic influence, particularly Harold Bloom's oedipal theory of revisionist "misreading," as insufficient for understanding the influence Pound's modernist practice and his relationship to poetic tradition had in defining the postmodernist poetics of Olson, Duncan, and other postwar American writers. The relation of these poets is most clearly seen on a formal level, but it is also evident in thematic elements of their work and in their stance toward poetic convention, the "canon," political and social engagement, and the inclusion of historical and other nonpoetic materials in the poetic text.

This book makes a significant contribution to the study of modern American poetry by exploring modernism's legacy and charting new canonical possibilities in American literature. In reading Pound through the works of later poets, it also provides important new insights into Pound's own work and ideas.

Christopher Beach teaches at Columbia University and has written widely on modern and contemporary poetry.

"This brilliantly particularizing work maps more usefully than any other I know the locating tradition of postmodern "New American Poetry" in all its persistent energies and relationships. Christopher Beach reads with exceptional clarity the multivalent track of Pound's influence, from Charles Olson to Edward Dorn, from Robert Duncan to Charles Bernstein. His is the first guide of such authority."Robert Creeley

"An American Pound tradition? Yes. And as Christopher Beach shows, it's most manifest in poets whose superficial resemblance to Pound (or to one another) can seem slight: the Zukofsky ofAnew, the Ed Dorn of Slinger. That tradition is not imitation is only the most salient of the lessons offered by Beach's remarkable book."Hugh Kenner

2. ABC of Influence: Ezra Pound and the Remaking of American Poetic Tradition