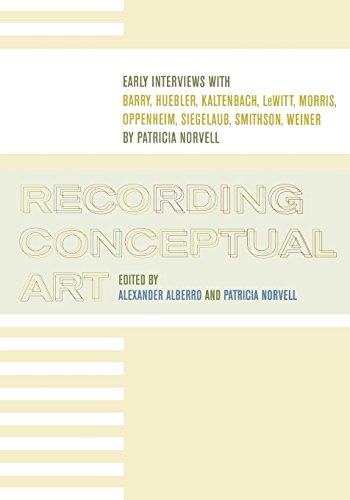 Recording Conceptual Art features a highly provocative series of previously unpublished interviews conducted in early 1969 with some of the most dynamic, daring, and innovative artists of the tumultuous 1960s. The nine individuals—eight artists and one art dealer—are now known as major contributors to Conceptual art. These fascinating dialogues, conducted by Patricia Norvell, provide tantalizing moments of spontaneous philosophizing and brilliant insights, as well as moments of unabashed self-importance, with highly imaginative and colorful individuals.

Alexander Alberro is Assistant Professor of Modern Art at the University of Florida. He is coeditor of Conceptual Art: A Critical Anthology (1999) and editor of Two-Way Mirror Power: Selected Writings by Dan Graham on His Art (1999). Patricia Norvell is an artist living in New York City. Her work has appeared widely in public spaces and galleries across the United States. She has taught at Columbia University, Hunter College, and other institutions.

"Reading the interviews gathered by Patricia Norvell more than thirty years ago is like opening one of the time capsules Steven Kaltenbach made at around the same time and discusses here. It makes one feel nostalgic for these uncompromising times-so much has changed, so fast! One should be immensely grateful to Norvell for her undertaking and, paradoxically, for the long delay in the publication of these conversations: nothing could have better highlighted the candor and commitment of the artists who participated in this project than their willingness, long after the fact, to let their youthful voices be heard unedited. This is a precious document that casts a fresh light on the early history of Conceptual art, revealing all the doubts and uncertainties its practitioners had to overcome."—Yve-Alain Bois, Harvard University

"These interviews, full of the rich texture and confusion of an art movement at its inception, began as a "process piece" in mid-1969 when formalism still seemed worth defeating. The artists, tired of talking about turpentine, struggle to extend the rhetoric of form, and as they do so, reveal their roles as theorists and philosophers of a newly cerebral art, Conceptualism. Alberro's helpful introduction frames both Norvell's provocative questions and the surprising responses in a useful book that continues the process of historicizing 20th century art."—Caroline Jones, author of Machine in the Studio

"The contemporary interviews collected in this volume shift the ground on which conceptualism in the United States should be understood. The middle months of 1969 were a time of artistic and social unease when artists were anxious to test-and occasionally to declaim, as the interviews demonstrate-ideas in conversation with a sympathetic interlocutor. Patricia Norvell proves to have been an ideal listener. She knew conceptualism well enough to keep the conversations honest, but not so well as to make the artists defensive and wary. The artists had things to say, and were not afraid to put themselves out on a limb."—John O'Brian, Professor of Art History, University of British Columbia

"[This book is] a reminder that the project of Conceptual art and its artists' reasons for refusing the object of art were far from monolithic. The differences that emerge in the interviews are spoken in voices that are still fresh and particular, but each voice and position is tied to the moment of the late 1960s, from stoned mysticism to philosophical idealism, from political optimism to materialist critique."—Howard Singerman, author of Art Subjects

Descrizione libro University of California Press, 2001. Paperback / softback. Condizione: New. New copy - Usually dispatched within 4 working days. Featuring a highly provocative series of interviews conducted in early 1969 with some of the most dynamic, daring, and innovative artists of the tumultous 1960s. The nine individuals - eight artists and one art dealer - are now known as major contributors to Conceptual art. Codice articolo B9780520220119

Descrizione libro University of California Press, 2001. Condizione: NEW. 9780520220119 This listing is a new book, a title currently in-print which we order directly and immediately from the publisher. For all enquiries, please contact Herb Tandree Philosophy Books directly - customer service is our primary goal. Codice articolo HTANDREE01134566