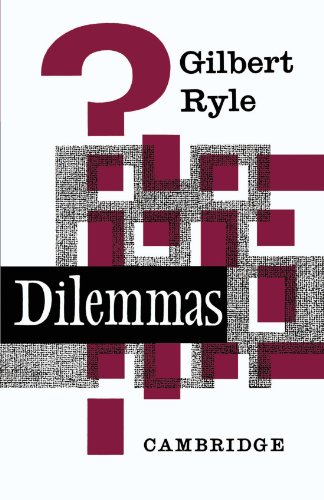 I did something yesterday, so it was true a thousand years ago that I was going to do it. Could I help it, then? Professor Ryle shows that I could; he also shows that a dilemma like this starts with a slender base - the question whether statements in the future can be true - and opens out before one notices it into questions like 'is it worthwhile learning to swim?' In his second demonstration Professor Ryle proves that Achilles will after all overtake his tortoise and will not have to pursue it through all eternity. These two puzzles were classic if academic examples of the dilemmas Professor Ryle is concerned with. Common sense tells me that I can to some extent control my life; should I then, faced with an apparently logical argument for fatalism, reject common sense? Again, because I enjoy or dislike things, are all my actions due to the seeking of pleasure and the avoidance of pain? Because my eyes and ears tell me one set of things about the world and science tels me another, am I to think my senses less reliable or accurate than science? Professor Ryle's aim is to arbitrate between these pairs of theories which compete for our allegiance, and to show that the either/or which they seem to insist on is a false dilemma. It may lead to mere muddle, or to a more subtle confusion; either way these tugs-of-war between conflicting theories may bring the ordinary man either to confused or wrong action or to intellectual apathy.

'The great merit of this book is that it grasps philosophical problems at that critical stage when they are just casting off their connexions with everyday life, just about to launch on their long academic flight, and that it attempts to deal with them then and there, before they can become airborne. Brisk, homely and almost practical, it really challenges everyone to try to be his own philosopher ... the peculiar, penetrating simplicity of this kind of philosophy is exceedingly hard to achieve.' The Times Literary Supplement

Professor Ryle's aim is to arbitrate between pairs of theories which compete for our allegiance, and to show that the either/or which they seem to insist on is a false dilemma.