Articoli correlati a The Concise Cambridge History of English Literature 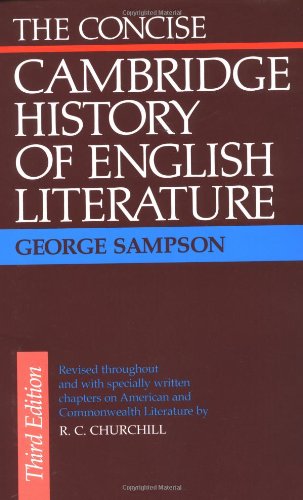 Sampson's Concise History (first published in 1941) was a summary in readable form of the great Cambridge History with some personal touches by Sampson. The second edition had a substantial new chapter by R. C. Churchill on twentieth-century literature and appeared in 1961. This is a digital reprint of the 1970 edition, prepared by Mr Churchill, which provides a revision of the first thirteen chapters. Three very substantial chapters were added that had the effect of making this the only complete and up-to-date survey as of 1970 of world literature in English. The literature of the USA is surveyed in extenso and in its own right. The literatures in English of Ireland, India, Pakistan, Ceylon, Malaysia, Canada, Australia, New Zealand, the West Indies, South Africa and the predominately English-speaking African states are also treated. Students and general readers will find this a comprehensive and lively-minded survey, guide and reference book to the world's literature in the English language.

Sampson's Concise History is a summary in readable form of the great Cambridge History with exclusive chapters on world literature in English. Students and general readers will find this a comprehensive and lively-minded survey, guide and reference book to the world's literature in the English language.

1. From the beginnings to the cycles of romance; 2. The end of the Middle Ages; 3. Renascence and reformation; 4. Prose and poetry: Sir Thomas North to Michael Drayton; 5. The drama to 1642: part I; 6. The drama to 1642: part II; 7. Cavalier and Puritan; 8. The age of Dryden; 9. From Steele and Addison to Pope and Swift; 10. The age of Johnson; 11. The period of the French revolution; 12. The nineteenth century: part I; 13. The nineteenth century: part II; 14. Empire and after: from the nineteenth to the twentieth century in Britain and overseas; 15. The literature of the United States of America from the colonial period to Henry James; 16. The age of T. S. Eliot: the mid-twentieth-century literature of the English-speaking world; Index.