Articoli correlati a Alien Wisdom: The Limits of Hellenization

Alien Wisdom: The Limits of Hellenization 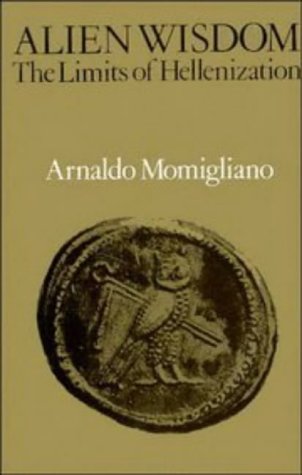 In this classic study of cultural confrontation Professor Arnaldo Momigliano looks at the attitude of the Greeks to four different civilizations - the Roman, Celtic, Jewish and Persian - and analyses their cultural and intellectual interactions from the fourth to the first centuries BC. He argues that in the Hellenistic period the Greeks, Romans and Jews formed a special exclusive relationship and effectively established what until recent times was the normal horizon of Western civilization.

'This book, published in the year of his retirement, displays that elegance of style, openness of mind, and delight.' Oswyn Murray, Journal of Roman Studies

'Culture shock at such a period and on such a scale is a great theme, to which Professor Momigliano has applied all his enormous erudition, acuteness and powers of synthesis ... few men have the energy and mental power to travel on as many different intellectual passports as Professor Momigliano.' Simon Hornblower, The Times Literary Supplement

'This brilliant book deals with the interaction of Hellenistic civilisation up to the date of Augustus and the neighbouring cultures of Rome, the Celts, the Jews and Persia, concentrating on the less familiar aspects of the influence of these other cultures on the Greeks ... Enormous learning is displayed with full references for the professional reader. But the author's gift of clarity makes the book accessible to the ordinary reader who can follow, if he cannot check, the argument.' The Economist

'Diverse interests and enormous erudition have continued to be a mark of Professor Momigliano's large output. He has ranged up and down the centuries of the ancient world, classical and near eastern, deploying a by now legendary mastery of bibliographical techniques and a shrewdness of judgement which together have earned his universal respect as one of the most eminent of ancient historians.' The Times Higher Education Supplement

This study of cultural confrontation looks at the attitude of the Greeks to four different civilizations - the Roman, Celtic, Jewish and Persian - and analyses their cultural and intellectual interactions in the last four centuries B.C. It argues that the Greeks, Romans and Jews formed an exclusive relationship, effectively establishing, what was until recently, the normal horizon of Western civilisation.

1. ALIEN WISDOM: THE LIMITS OF HELL

2. ALIEN WISDOM: THE LIMITS OF HELL

3. ALIEN WISDOM: THE LIMITS OF HELL

4. Alien Wisdom: The Limits of Hellenization