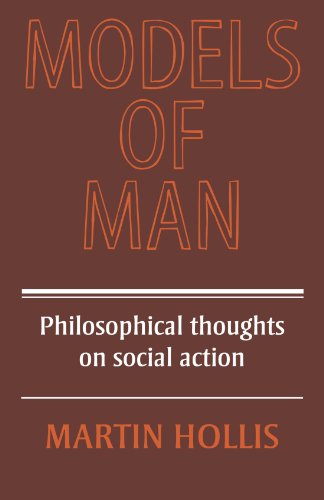 All social theorists and philosophers who seek to explain human action have a 'model of man', a metaphysical view of human nature. Some make man a plastic creature of nature and nurture, some present him as the autonomous creator of his social world, some offer a compromise. Each view needs its own theory of scientific knowledge calling for philosophic appraisal and the compromise sets harder puzzles than either. Passive accounts of man, for example, have a robust notion of causal explanation but cannot either find or dispense with a self to apply them to. Active accounts rightly stress an autonomous self, but lack a proper concept of explanation. Martin Hollis takes these tensions and contrasts from the thought of sociologists, economists, and psychologists. He then develops a model of his own - one which seeks to connect personal and social identity through an ambitious theory of rational action and a priori knowledge, proposing a sense in which men can act freely and still be a subject for scientific explanation.

'Why do human beings behave in detail exactly as they do and not in some other way? What, if anything, causes them so to act? How can we validly explain the fact that they do in practice act this way and not differently? ... It is the distinctive merit of Martin Hollis's exceedingly clever ... little book to ram home the priority of these vertiginous metaphysical questions to any intellectually coherent attempt to understand one another, individually or by the gross. Radical interpretation is simply the stuff of human life; and the social sciences are radical interpretation on stilts.' New Society

'His extremely clear, sharp, witty style ... makes the entire book very well worth reading. I find his central point entirely persuasive, and it may well be that his careful and courteous defence of it will be the best way to bring it home to those who still see witchcraft in any suggestion that the world must be explained in different ways for different purposes.' Philosophy

Martin Hollis examines the contrasting models with which social theorists and philosophers seek to explain human action, and develops a model of his own, which connects personal and social identity through an ambitious theory of rational action and a priori knowledge.