Articoli correlati a The Athenian Trireme: The History and Reconstruction...

The Athenian Trireme: The History and Reconstruction of an Ancient Greek Warship 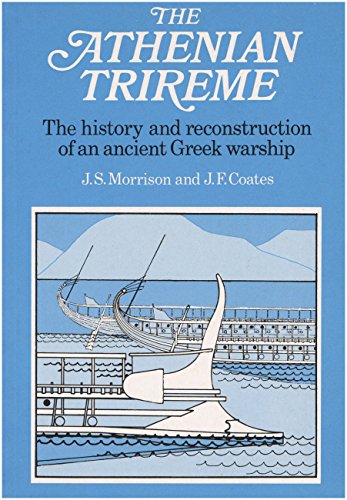 The trizeme was the warship which brought Athens preeminence in Greek waters in the fifth and fourth centuries BC. The exact structure of the trireine has puzzled scholars through the centuries and various attempts have been made to reconstruct the ship. John Morrison, a classical scholar, and John Coates, a naval architect, have perfected a design which they believe fulfils the essential structural requirements as these emerge from a study both of the archaeological evidence and of the historical accounts of sea- battles. A full-size replica of the Threme has now been built in a Greek shipyard following Morrison's and Coates' specifications and is to be launched in Piraeus this autumn and commissioned into the Hellenic Navy. The Athenian Trireme provides the background and describes the ancient ship in battle and in transit, the men who manned her and the materials of which she was made. In the final chapters, John Coates. discusses fundamentals underlying the design from the point of view of the naval architect and describes the main physical features of the reconstructed ship.

THE ATHENIAN TRIREME: THE HISTOR