Articoli correlati a The Book of Memory: A Study of Memory in Medieval Culture

Carruthers, Mary J. The Book of Memory: A Study of Memory in Medieval Culture

The Book of Memory: A Study of Memory in Medieval Culture 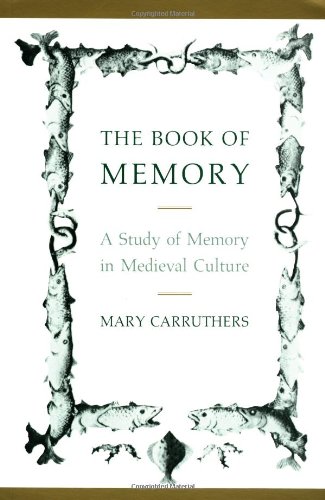 The Book of Memory is a wide-ranging and beautifully illustrated account of the workings and function of memory in medieval society. Memory was the psychological faculty valued above all others in the period stretching from late antiquity through to the Renaissance. The medieval assumption that human learning is above all based in memorative processes had profound implications for the contemporary understanding of all creative activity, and the social role of literature and art. Dr Carruthers looks at models for the understanding of memory, examines scholastic and early humanist adaptations of classical mnemotechniques, and throughout offers examples from the works of Dante, Chaucer, Aquinas and others. This study by a literary scholar draws upon insights from a variety of disciplines, including modern hermeneutical theory, art history and codicology, psychology and anthropology, the histories of medicine, education, and of meditation and spirituality. It will be important to students in all these fields who value interdisciplinary approaches to historical material.

"I have been looking at medieval illuminations for years, but after reading what Mary Carruthers has to say about them (well illustrated by thirty reproductions) I can never look at them in quite the same way again....A short review can do no more than scratch the surface of this profound book." Canadian Journal of History

"Mary Carruthers...has much enlarged our conception of memory in the Middle Ages....The Book of Memory is the work of a careful and erudite scholar, scrupulous and yet imaginative..." Times Literary Supplement

"The Book of Memory is not only a very fine ethnographic study of folk psychology and an exemplary study of material culture (medieval books), but also a very significant contribution to general anthropological theory." Man

"...a delightful and erudite presentation on the role of memoria, or memory, in the Middle Ages." Elwood E. Mather III, The Sixteenth Century Journal

"Mary Carruthers has presented a detailed study of the importance of memory to the preservation and transmission of knowledge and written material. She also gives us an important insight into the relationship between writing and orality....This book is excellent reading....it is a specialized book in a neglected field of study." Elmer Clark, History

"Just as memory was fundamental to the Middle Ages, Mary Carruthers's The Book of Memory will be fundamental to our understanding and teaching of medieval mentalité. Rather than asking who needs Carruther's book when Frances Yates's The Art of Memory, written from a Renaissance perspective, has served scholars since 1966, I would wonder who can do without it. Carruthers's documentation of the layout of medieval memory and of books as both echoes of and aids to memory formation deserves the attention of all serious students of the history of ideas....Though Carruthers positions her work with respect to Yates's scholarship, she supersedes it. Scholars from all disciplines who have sought support in Frances Yates will want to enlarge their conception of medieval books and their rememberers by consulting Mary Carruthers's The Book of Memory." Elaine E. Whitaker, South Atlantic Review

"Carruthers has done a great service by providing so lucid and authoritative an account of medieval memory systems." Modern Language Quarterly

"This is an excellent and important book, and like all good works of scholarship it has major implications beyond the subject matter actually treated by the author....This book will open up new, historically focused ways of understanding reading and writing in the Middle Ages as social practices based on educational objectives and cultural assumptions quite different from our own. As I was reading, I saw many ways to apply Carruther's arguments to Old and Middle English poetical codices and to the works of Dante, Chaucer, Langland, and Gower. The Book of Memory opens a door to future research that I hope many scholars and students will pass through." Martin Irvine, Modern Philology

"Of making many books there is no end, but for some books we are continually grateful. Occasionally, we find a book that opens up a whole new vista, a work so solidly organized and so carefully detailed that it immediately becomes a standard reference book. Mary Carruthers's The Book of Memory is that sort of book." Joyce Sutphen, Rhetoric Society Quarterly

Mary Carruthers is the author of The Craft of Thought (Cambridge 1998) and The Medieval Craft of Memory (University of Pennsylvania 2002) as well as of The Book of Memory (1990 and 2008). She divides her time between New York City and Oxford, where she holds the positions of Remarque Professor of Literature at New York University and Fellow of All Souls College.

3. The Book of Memory: A Study of Memory in Medieval Culture (Cambridge Studies in Medieval Literature) Carruthers, Mary J.