Articoli correlati a Sacred and Secular: Religion and Politics Worldwide 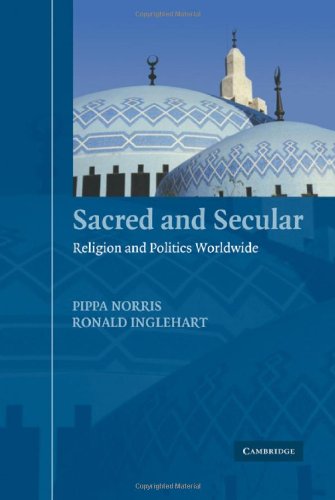 Seminal thinkers of the nineteenth century - Auguste Comte, Herbert Spencer, Emile Durkheim, Max Weber, Karl Marx, and Sigmund Freud - all predicted that religion would gradually fade in importance and cease to be significant with the emergence of industrial society. The belief that religion was dying became the conventional wisdom in the social sciences during most of the twentieth century. During the last decade, however, the secularization thesis has experienced the most sustained challenge in its long history. The traditional secularization thesis needs updating. Religion has not disappeared and is unlikely to do so. Nevertheless, the concept of secularization captures an important part of what is going on. This book develops a theory of secularization and existential security. Sacred and Secular is essential reading for anyone interested in comparative religion, sociology, public opinion, political behavior, political development, social psychology, international relations, and cultural change.

Recensione:
'This is the antidote to fact-free speculation. Instead of grandiose speculation about the impact of globalization and economic development on religion world-wide, Norris and Inglehart give us gold standard social science: sound reasoning based on the vast body of evidence in the accumulated World Values Survey data sets.' Steve Bruce, University of Aberdeen

'This book, by two skilled and prolific political scientists, will be widely read by scholars and students interested in gender politics, political culture, political change and modernization, and comparative public opinion and political participation.' Virginia Sapiro, University of Wisconsin, Madison

'A superb book that will reshape the debate over secularization. We have been losing sight of the big picture; Norris and Inglehart restore perspective. This study is both a major achievement empirically and a substantial contribution to theory.' David Voas, University of Manchester

'This is an important book that counters conventional wisdom with considerable and careful research. Its arguments will be controversial, and should inspire political scientists and sociologists who disagree with its premises to challenge it. The book is must reading for anyone interested in religion and politics, for it is likely to be at the center of the debate for years to come.' Clyde Wilcox, Georgetown University

'... the book is a very valuable overview of the general distribution of religiosity in the current world and some of its main dynamics.' GeoJournal

'Norris & Inglehart's book is a pleasure to read and an inspiration for scholars for its effort to generate solid knowledge on a much debated question. ... the reader will find much fascinating material,...' Journal of Peace research
Descrizione del libro:
Sacred and Secular examines the validity of the secularization thesis, developing a theory of secularization and existential security. It is essential reading for anyone interested in comparative religion, sociology, public opinion, political behavior, political development, social psychology, international relations, and cultural change.