Articoli correlati a Looking at Shakespeare: A Visual History of Twentieth-Centur...

Looking at Shakespeare: A Visual History of Twentieth-Century Performance 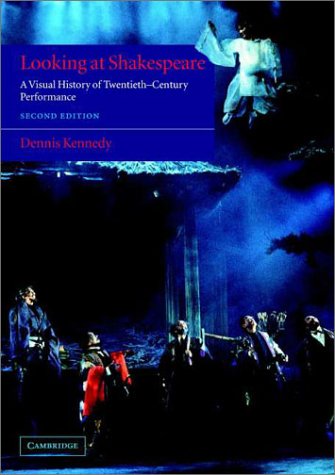 Most studies of the performance of Shakespeare's work concentrate on how the text has been played and what meanings have been conveyed through acting and interpretive directing. Dennis Kennedy demonstrates that much of audience response is determined by the visual representation, which is normally more immediate and direct than the aural conveyance of a text. Ranging widely over productions in Britain, Europe, Japan and North America, Kennedy gives a thorough account of the main scenographic movements of the century, investigating how the visual relates to Shakespeare on the stage. The second edition of this acclaimed history includes a new chapter on Shakespeare performance in the 1990s, bringing the story up to date by drawing on examples from a wide international field. There are more than twenty new illustrations, some of them in colour (bringing the total number of illustrations to almost 200), and previous references have been updated.

'Looking at Shakespeare is brilliant. Kennedy's analytic skills, his visual perceptiveness and ability to recreate the dynamic of performance from the static evidence of photographs mean the book moves seamlessly between productions seen and unseen ... Kennedy is that rarest of guides, the reliable kind.' Peter Holland, The Times Literary Supplement

'... It is Kennedy's commentary, at once lucid and erudite, that makes the visual documentation leap off the page. Enlightening for the general reader, invaluable for theatre professionals and academics, Looking at Shakespeare ... breaks new ground for performance-oriented theatre scholarship.' American Theatre

'A comprehensive history and visual feast.' Shakespeare at the Centre

'Pick of the month' 'The second edition of this landmark work first published in 1993 does everything the subtitle promises and more. Kennedy has produced a history of design, but also a history of interpretation, of theatre technology, of twentieth-century theatre itself ... Although the work is well illustrated (over 170 black and white pictures and 23 colour plates), Kennedy's attentive evocation is far more vivid. His accounts are unswervingly precise ... This updated edition allows Kennedy to follow lines of thought to the millennium's end.' Plays International

'Cambridge University Press issued the first edition of this magnificent book in 1993 ... The enhanced contents [of the 2nd edition] add forty-five new pages of incisive commentary that include twenty-two black-and-white production photos (plus two new colour plates to accompany the original twenty-one). Cambridge prints this augmented edition on a brighter gloss stick than the original, making an already richly visual volume - one where scrutiny of the pictures is integral to appreciation of critical perspective-even more eye-friendly. ... The new and improved edition of this book will continue to earn a position in ready reach of readers and course syllabi. Kennedy's work not only informs our knowledge and skills in looking at Shakespeare but also stimulates broader perspectives in thinking about theatre.' Paul Nelson, Theatre Survey 44.1

Ranging widely over productions in Britain, Europe and North America, Dennis Kennedy gives a thorough account of the main scenographic movements of the century, investigating how the visual relates to Shakespeare on the stage. This edition includes a new chapter on Shakespeare performance in the 1990s and twenty new illustrations.

1. Looking at Shakespeare: A Visual History of Twentieth-Century Performance

2. Looking at Shakespeare: A Visual History of Twentieth-Century Performance

5. Looking at Shakespeare: A Visual History of Twentieth-Century Performance