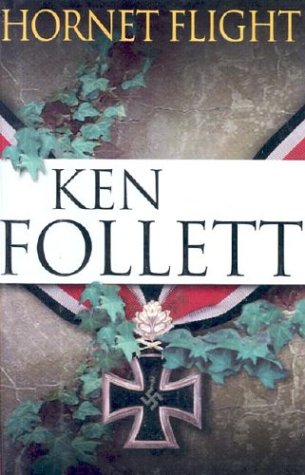 In June 1941, with the war not going well for the British, the lives of three people on both sides of the English Channel--MI6 intelligence analyst Hermia Mount, Danish police detective and collaborator Peter Flemming, and young Harald Olufsen--intertwine as Harald makes a discovery that could change the course of the war, if he can get the information to England. 500,000 first printing.

Ken Follett is the author of fifteen novels, including most recently the New York Times bestsellers Jackdaws and Code to Zero.

A man with a wooden leg walked along a hospital corridor.

He was a short, vigorous type with an athletic build, thirty years old, dressed in a plain charcoal gray suit and black toe-capped shoes. He walked briskly, but you could tell he was lame by the slight irregularity in his step: tap-tap, tap-tap. His face was fixed in a grim expression, as if he were suppressing some profound emotion.

He reached the end of the corridor and stopped at the nurse's desk. "Flight Lieutenant Hoare?" he said.

The nurse looked up from a register. She was a pretty girl with black hair, and she spoke with the soft accent of County Cork. "You'll be a relation, I'm thinking," she said with a friendly smile.

Her charm had no effect. "Brother," said the visitor. "Which bed?"

He turned on his heel and strode along the aisle to the end of the ward. In a chair beside the bed, a figure in a brown dressing gown sat with his back to the room, looking out of the window, smoking.

The man in the chair stood up and turned around. There was a bandage on his head and his left arm was in a sling, but he was smiling. He was younger and taller than the visitor. "Hello, Digby."

Digby put his arms around his brother and hugged him hard. "I thought you were dead," he said.

Then he began to cry.

"I was flying a Whitley," Bart said. The Armstrong Whitworth Whitley was a cumbersome long-tailed bomber that flew in an odd nose-down attitude. In the spring of 1941, Bomber Command had a hundred of them, out of a total strength of about seven hundred aircraft. "A Messerschmitt fired on us and we took several hits," Bart continued. "But he must have been running out of fuel, because he peeled off without finishing us. I thought it was my lucky day. Then we started to lose altitude. The Messerschmitt must have damaged both engines. We chucked out everything that wasn't bolted down, to reduce our weight, but it was no good, and I realized we'd have to ditch in the North Sea."

Digby sat on the edge of the hospital bed, dry-eyed now, watching his brother's face, seeing the thousand-yard-stare as Bart remembered.

"I told the crew to jettison the rear hatch then get into ditching position, braced against the bulkhead." The Whitley had a crew of five, Digby recalled. "When we reached zero altitude I heaved back on the stick and opened the throttles, but the aircraft refused to level out, and we hit the water with a terrific smash. I was knocked out."

They were step brothers, eight years apart. Digby's mother had died when he was thirteen, and his father had married a widow with a boy of her own. From the start, Digby had looked after his little brother, protecting him from bullies and helping him with his schoolwork. They had both been mad about airplanes, and dreamed of being pilots. Digby lost his right leg in a motorcycle accident, studied engineering, and went into aircraft design; but Bart lived the dream.

"When I came to, I could smell smoke. The aircraft was floating and the starboard wing was on fire. The night was dark as the grave, but I could see by the light of the flames. I crawled along the fuselage and found the dinghy pack. I bunged it through the hatch and jumped. Jesus, that water was cold."

His voice was low and calm, but he took hard pulls on his cigarette, drawing the smoke deep into his lungs and blowing it out between tight-pursed lips in a long jet. "I was wearing a life jacket and I came to the surface like a cork. There was quite a swell, and I was going up and down like a tart's knickers. Luckily, the dinghy pack was in front of my nose. I pulled the string and it inflated itself, but I couldn't get in. I didn't have the strength to heave myself out of the water. I couldn't understand it-didn't realize I had a dislocated shoulder and a broken wrist and three cracked ribs and all that. So I just stayed there, holding on, freezing to death."

There had been a time, Digby recalled, when he thought Bart had been the lucky one.

"Eventually Jones and Croft appeared. They'd held on to the tail until it went down. Neither could swim, but their Mae Wests saved them, and they managed to scramble into the dinghy and pull me in." He lit a fresh cigarette. "I never saw Pickering. I don't know what happened to him, but I assume he's at the bottom of the sea."

He fell silent. There was one crew member unaccounted for, Digby realized. After a pause, he said, "What about the fifth man?"

"John Rowley, the bomb-aimer, was alive. We heard him call out. I was in a bit of a daze, but Jones and Croft tried to row toward the voice." He shook his head in a gesture of hopelessness. "You can't imagine how difficult it was. The swell must have been three or four feet, the flames were dying down so we couldn't see much, and the wind was howling like a bloody banshee. Jones yelled, and he's got a strong voice. Rowley would shout back, then the dinghy would go up one side of a wave and down the other and spin around at the same time, and when he called out again his voice seemed to come from a completely different direction. I don't know how long it went on. Rowley kept shouting, but his voice became weaker as the cold got to him." Bart's face stiffened. "He started to sound a bit pathetic, calling to God and his mother and that sort of rot. Eventually he went quiet."

Digby found he was holding his breath, as if the mere sound of breathing would be an intrusion on such a dreadful memory.

"We were found soon after dawn, by a destroyer on U-boat patrol. They dropped a cutter and hauled us in." Bart looked out of the window, blind to the green Hertfordshire landscape, seeing a different scene, far away. "Bloody lucky, really," he said.

They sat in silence for a while, then Bart said, "Was the raid a success? No one will tell me how many came home."

"What about my squadron?"

"Sergeant Jenkins and his crew got back safely." Digby drew a slip of paper from his pocket. "So did Pilot Officer Arasaratnam. Where's he from?"

"And Sergeant Riley's aircraft took a hit but made it back."

"Luck of the Irish," said Bart. "What about the rest?"

"But there were six aircraft from my squadron on that raid!" Bart protested.

"I know. As well as you, two more were shot down. No apparent survivors."

"So Creighton-Smith is dead. And Billy Shaw. And...Oh, God." He turned away.

Bart's mood changed from despair to anger. "It's not enough to be sorry," he said. "We're being sent out there to die!"

"For Christ's sake, Digby, you're part of the bloody government."

"I work for the Prime Minister, yes." Churchill liked to bring people from private industry into the government and Digby, a successful aircraft designer before the war, was one of his troubleshooters.

"Then this is your fault as much as anyone's. You shouldn't be wasting your time visiting the sick. Get the hell out of here and do something about it."

"I am doing something," Digby said calmly. "I've been given the task of finding out why this is happening. We lost fifty percent of the aircraft on that raid."

"Bloody treachery at the top, I suspect. Or some fool air marshal boasting in his club about tomorrow's raid, and a Nazi barman taking notes behind the beer pumps."

Bart sighed. "I'm sorry, Diggers," he said, using a childhood nickname. "It's not your fault, I'm just blowing my top."

"Seriously, have you any idea why so many are being shot down? You've flown more than a dozen missions. What's your hunch?"

Bart looked thoughtful. "I wasn't just sounding off about spies. When we get to Germany, they're ready for us. They know we're coming."

"What makes you say that?"

"Their fighters are in the air, waiting for us. You know how difficult it is for defensive forces to time that right. The fighter squadron has to be scrambled at just the right moment; they must navigate from their airfield to the area where they think we might be, then they have to climb above our ceiling, and when they've done all that they have to find us in the moonlight. The whole process takes so much time that we should be able to drop our ordnance and get clear before they catch us. But it isn't happening that way."

Digby nodded. Bart's experience matched that of other pilots he had questioned. He was about to say so when Bart looked up and smiled over Digby's shoulder. Digby turned to see a Negro in the uniform of a squadron leader. Like Bart, he was young for his rank, and Digby guessed he had received the automatic promotions that came with combat experience-flight lieutenant after twelve sorties, squadron leader after fifteen.

"You had us all worried, Bartlett. How are you?" The newcomer's accent was Caribbean overlaid with an Oxbridge drawl.

With a fingertip, Charles touched the back of Bart's hand where it emerged from his sling. It was a curiously affectionate gesture, Digby thought. "I'm jolly glad to hear it," Charles said.

"Charles, meet my brother Digby. Digby, this is Charles Ford. We were together at Trinity until we left to join the air force."

"It was the only way to avoid taking our exams," Charles said, shaking Digby's hand.

Bart said, "How are the Africans treating you?"

Charles smiled and explained to Digby, "There's a squadron of Rhodesians at our airfield. First class flyers, but they find it difficult to deal with an officer of my color. We call them the Africans, which seems to irritate them slightly. I can't think why."

Digby said, "Obviously you're not letting it get you down."

"I believe that with patience and improved education we may eventually be able to civilize such people, primitive though they seem now." Charles looked away, and Digby caught a glimpse of the anger beneath his good humor.

"I was just asking Bart why he thinks we're losing so many bombers," Digby said. "What's your opinion?"

Descrizione libro Hardcover. Condizione: New. Condizione sovraccoperta: New. 1st Edition. NEW! Bright, glossy and clean! 1941, the Luftwaffe shooting down the Brit fliers so easily. A young Dane finds a secret German installation. He's got to tell England! How? A banged up Hornet Moth in a ruined church? Is it worth the risk to self and family? He's no mechanic! But he MUST.Fab book!. Codice articolo 001224