Articoli correlati a Twas the Night Before Christmas: A Visit from St. Nicholas

Moore, Clement Clarke Twas the Night Before Christmas: A Visit from St. Nicholas

Twas the Night Before Christmas: A Visit from St. Nicholas 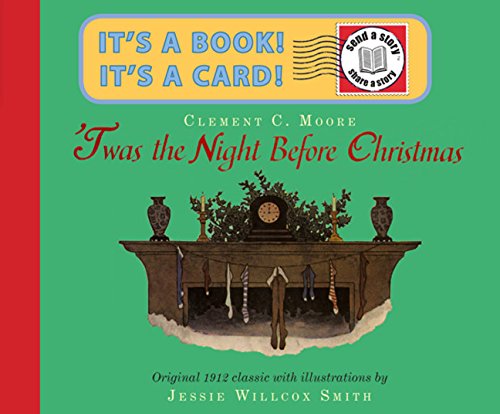 Clement Moore’s poem was written in 1822 and has been a holiday classic ever since. This edition, with gorgeous illustrations by Jessie Wilcox Smith, was first published in 1912 and is considered by many to be the definitive version of the story.
Now, in the Send-A-Story format, this tiny, mailable version complete with addressable flaps and seals is the perfect Christmas treat for loved ones near and far. Why send a card when you can Send-A-Story?

Clement Clarke Moore (July 15, 1779 - July 10, 1863) was a writer and professor and is credited with writing "A Visit from St. Nicholas" for his children. Originally published anonymously on December 23rd, 1823, the poem that would come to be known as "'Twas the Night Before Christmas," was responsible for the creation of the Santa Claus myth as it is known in the United States and much of the English-speaking world.

Jessie Wilcox Smith (September 6, 1863 - May 3, 1935) was a prolific illustrator of magazines and children's books. She was a frequent contributor toLadies Home Journal. A student of Howard Pyle, some of her best-known work for children includes Charles Kingsley'sThe Water Babies.