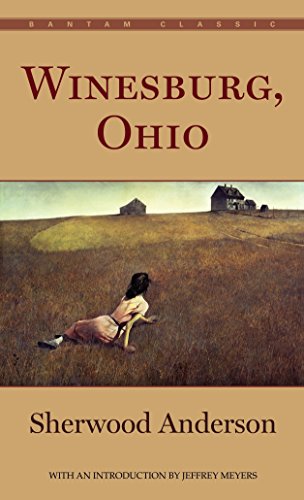 Hidden passions inform and shape the lives of the residents of a placid, archetypal ,small American, town, in a series of stories that has become a classic of American literature. Reissue.

"When he calls himself a 'poor scribbler' don't believe him. He is not a poor scribbler . . . he is a very great writer."—Ernest Hemingway

"Winesburg, Ohio, when it first appeared, kept me up a whole night in a steady crescendo of emotion."—Hart Crane

"As a rule, first books show more bravado than anything else, unless it be tediousness. But there is neither of these qualities in Winesburg, Ohio. . . . These people live and breathe: they are beautiful."—E. M. Forster

"Winesburg, Ohio is an extraordinarily good book. But it is not fiction. It is poetry."—Rebecca West

Sherwood Anderson (1876-1941) spent most of his boyhood in Clyde, Ohio, the model for Winesburg, Ohio. And like the central figure of that work, Anderson left small-town life behind after his mother’s death, when he was nineteen. After serving in the Spanish-American War, the mostly self-taught Anderson became successful advertising copywriter in Chicago. Then in 1912, torn between his responsibilities and his drive to create, he had a breakdown that has become legendary. Having become the owner of a small factory, Anderson abruptly walked from his office and wandered about for four days in a trancelike state before ending up in an Ohio hospital. Realizing he must devote his life to writing, he finally broke with his wife and family and joined Carl Sandburg and Theodore Dreiser, who were at the core of Chicago’s literary group. By 1925, Anderson had demonstrated such talent that H.L. Mencken called him “America’s most distinguished novelist.” A mentor of William Faulkner and Thomas Wolfe, Anderson was known for his colloquial style and his exploration of gender and sexuality in relationships. His works of fiction include Windy McPherson’s Son (1916); Poor White (1920); The Triumph of the Egg (1921), a short-story collection; and Dark Laughter (1925). Also important are his autobiographical works: A Story Teller’s Story (1924), Tar: A Midwest Childhood (1926), and Sherwood Anderson’s Memoirs (1942). He died of peritonitis on a trip abroad when a broken toothpick perforated his intestines.

Descrizione libro Random House USA Inc, United States, 2008. Paperback. Condizione: New. Language: English. Brand new Book. Published in 1919, Winesburg, Ohio is Sherwood Anderson's masterpiece, a work in which he achieved the goal to which he believed all true writers should aspire: to see and feel "all of life within." In a perfectly imagined world, an archetypal small American town, he reveals the hidden passions that turn ordinary lives into unforgettable ones. Unified by the recurring presence of young George Willard, and played out against the backdrop of Winesburg, Anderson's loosely connected chapters, or stories, coalesce into a powerful novel. In such tales as "Hands," the portrayal of a rural berry picker still haunted by the accusations of homosexuality that ended his teaching career, Anderson's vision is as acute today as it was over eighty-five years ago. His intuitive ability to home in on examples of timeless, human conflicts--a workingman deciding if he should marry the woman who is to bear his child, an unhappy housewife who seeks love from the town's doctor, an unmarried high school teacher sexually attracted to a pupil--makes this book not only immensely readable but also deeply meaningful. An important influence on Faulkner, Hemingway, and others who were drawn to Anderson's innovative format and psychological insights, Winesburg, Ohio deserves a place among the front ranks of our nation's finest literary achievements. Codice articolo BZV9780553214390