Articoli correlati a The Caves of Steel: 2

Asimov, Isaac The Caves of Steel: 2

The Caves of Steel: 2 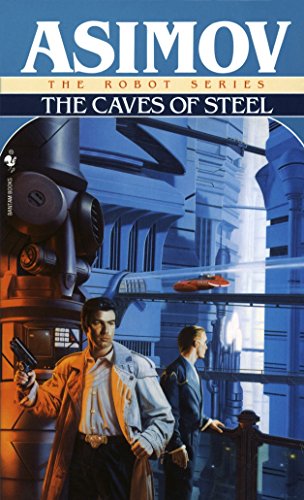 Fearing a violent confrontation between Earthmen and Spacers, Detective Baley and his new partner, a robot, investigate the murder of a Spacetown scientist

Isaac Asimov began his Foundation series at the age of twenty-one, not realizing that it would one day be considered a cornerstone of science fiction. During his legendary career, Asimov penned more than 470 books on subjects ranging from science to Shakespeare to history, though he was most loved for his award-winning science fiction sagas, which include the Robot, Empire, and Foundation series. Named a Grand Master of Science Fiction by the Science Fiction Writers of America, Asimov entertained and educated readers of all ages for close to five decades. He died, at the age of seventy-two, in April 1992.

1.
CONVERSATION WITH A COMMISSIONER

Lije Baley had just reached his desk when he became aware of R. Sammy watching him expectantly.

The dour lines of his long face hardened. “What do you want?”

“The boss wants you, Lije. Right away. Soon as you come in.”

R. Sammy turned on his heel and left to go about his duties. Baley wondered irritably why those same duties couldn’t be done by a man.

He paused to examine the contents of his tobacco pouch and make a mental calculation. At two pipefuls a day, he could stretch it to next quota day.

Then he stepped out from behind his railing (he’d rated a railed corner two years ago) and walked the length of the common room.

Simpson looked up from a merc-pool file as he passed. “Boss wants you, Lije.”

A closely coded tape reeled out of the merc-pool’s vitals as the small instrument searched and analyzed its “memory” for the desired information stored in the tiny vibration pattern of the gleaming mercury surface within.

“I’d kick R. Sammy’s behind if I weren’t afraid I’d break a leg,” said Simpson. “I saw Vince Barrett the other day.”

“He was looking for his job back. Or any job in the Department. The poor kid’s desperate, but what could I tell him? R. Sammy’s doing his job and that’s all. The kid has to work a delivery tread on the yeast farms now. He was a bright boy, too. Everyone liked him.”

Baley shrugged and said in a manner stiffer than he intended or felt, “It’s a thing we’re all living through.”

The boss rated a private office. It said JULIUS ENDERBY on the clouded glass. Nice letters. Carefully etched into the fabric of the glass. Underneath, it said COMMISSIONER OF POLICE, CITY OF NEW YORK.”

“Baley stepped in and said, “You want to see me, Commissioner?”

Enderby looked up. He wore spectacles because his eyes were sensitive and couldn’t take the usual contact lenses. It was only after one got used to the sight of them that one could take in the rest of the face, which was quite undistinguished. Baley had a strong notion that the Commissioner valued his glasses for the personality they lent him and suspected that his eyeballs weren’t as sensitive as all that.

The Commissioner looked definitely nervous. He straightened his cuffs, leaned back, and said, too heartily, “Sit down, Lije. Sit down.”

Baley sat down stiffly and waited.

“Fine,” echoed Enderby. “Just fine.” It had been a false start.

“Aloud, he said, “Commissioner, I wish you wouldn’t send R. Sammy out after me.”

“Well, you know how I feel about those things, Lije. But he’s been put here and I’ve got to use him for something.”

“It’s uncomfortable, Commissioner. He tells me you want me and then he stands there. You know what I mean. I have to tell him to go or he just keeps on standing there.”

“Oh, that’s my fault, Lije. I gave him the message to deliver and forgot to tell him specifically to get back to his job when he was through.”

“Baley sighed. The fine wrinkles about his intensely brown eyes grew more pronounced. “Anyway, you wanted to see me.”

“Yes, Lije,” said the Commissioner, “but not for anything easy.”

He stood up, turned away, and walked to the wall behind his desk. He touched an inconspicuous contact switch and a section of the wall grew transparent.

Baley blinked at the unexpected insurge of grayish light.

The Commissioner smiled. “I had this arranged specially last year, Lije. I don’t think I’ve showed it to you before. Come over here and take a look. In the old days, all rooms had things like this. They were called ‘windows.’ Did you know that?”

Baley knew that very well, having viewed many historical novels.

Baley squirmed a bit, but did as he was told. There was something indecent about the exposure of the privacy of a room to the outside world. Sometimes the Commissioner carried his affection of Medievalism to a rather foolish extreme.

That was it! That was what made him look wrong!

The Commissioner stared at him in mild surprise, took off his glasses, looked at them and then at Baley. Without his glasses, his round face seemed rounder and his chin a trifle more pronounced. He looked vaguer, too, as his eyes failed to focus properly.

He put his glasses back on his nose, then added with real anger, “I broke my old ones three days ago. What with one thing or another I wasn’t able to replace them till this morning. Lije, those three days were hell.”

“And other things, too. I’m getting to that.”

He turned to the window and so did Baley. With mild shock, Baley realized it was raining. For a minute, he was lost in the spectacle of water dropping from the sky, while the Commissioner exuded a kind of pride as though the phenomenon were a matter of his own arranging.

“This is the third time this month I’ve watched it rain. Quite a sight, don’t you think?”

“Against his will, Baley had to admit to himself that it was impressive. In his forty-two years he had rarely seen rain, or any of the phenomena of nature, for that matter.

He said, “It always seems a waste for all that water to come down on the city. It should restrict itself to the reservoirs.”

“Lije,” said the Commissioner, “you’re a modernist. That’s your trouble. In Medieval times, people lived in the open. I don’t mean on the farms only. I mean in the cities, too. Even in New York. When it rained, they didn’t think of it as waste. They gloried in it. They lived close to nature. It’s healthier, better. The troubles of modern life come from being divorced from nature. Read up on the Coal Century, sometime.”

The hell with it.

He said, grimly, “Look, Julius.” (It wasn’t his habit to get friendly with the Commissioner during office hours, however many ‘Lijes’ the Commissioner threw at him, but something special seemed called for here.) “Look, Julius, you’re talking about everything except what I came in here for, and it’s worrying me. What is it?”

“Sure. What isn’t on this planet? More trouble with the R’s?”

“In a way, yes. Lije. I stand here and wonder how much more trouble the old world can take. When I put in this window, I wasn’t just letting in the sky once in a while. I let in the City. I look at it and I wonder what will become of it in another century.”

Baley felt repelled by the other’s sentimentality, but he found himself staring outward in fascination. Even dimmed by the weather, the City was a tremendous thing to see. The Police Department was in the upper levels of City Hall, and City Hall reached high. From the Commissioner’s window, the neighboring towers fell short and the tops were visible. They were so many fingers, groping upward. Their walls were blank, featureless. They were the outer shells of human hives.

Baley looked westward, but it was as the Commissioner said. The horizon closed down. New York’s towers grew misty and came to an end against blank whiteness.

“I like the picture from here,” said the Commissioner. “It can just be made out in the gap between the two Brunswick Sectors. Low domes spread out. It’s the difference between us and the Spacers. We reach high and crowd close. With them, each family has a dome for itself. One family: one house. And land between each dome. Have you ever spoken to any of the Spacers, Lije?”

“A few times. About a month ago, I spoke to one right here on your intercom,” Baley said, patiently.

“Yes, I remember. But then, I’m just getting philosophical. We and they. Different ways of life.”

Baley’s stomach was beginning to constrict a little. The more devious the Commissioner’s approach, the deadlier he thought might be the conclusion.

He said, “All right. But what’s so surprising about it? You can’t spread eight billion people over Earth in little domes. They’ve got space on their worlds, so let them live their way.”

The Caves of Steel

The Caves of Steel (Paperback)

Descrizione libro Paperback. Condizione: New. Reprint. Language: English. Brand new Book. A millennium into the future two advancements have altered the course of human history: the colonization of the galaxy and the creation of the positronic brain. Isaac Asimov's Robot novels chronicle the unlikely partnership between a New York City detective and a humanoid robot who must learn to work together. Like most people left behind on an over-populated Earth, New York City police detective Elijah Baley had little love for either the arrogant Spacers or their robotic companions. But when a prominent Spacer is murdered under mysterious circumstances, Baley is ordered to the Outer Worlds to help track down the killer. The relationship between Life and his Spacer superiors, who distrusted all Earthmen, was strained from the start. Then he learned that they had assigned him a partner: R. Daneel Olivaw. Worst of all was that the "R" stood for robot--and his positronic partner was made in the image and likeness of the murder victim!. Codice articolo ABZ9780553293401

Caves of Steel (Paperback or Softback)