Articoli correlati a Biting the Sun: A Novel 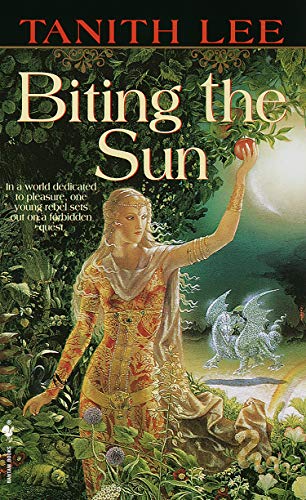 On a planet devoted to seeking pleasure no matter what the cost, where the dead can be re-incarnated continually, a band of rebel teenagers bucks the system to seek the more subtle joys of the soul. Reprint.

Of course, when I woke up in the Limbo Tub I'd changed my mind. Some quasi-robot medicine man was peering in at me.

"Look here, young woman--I see that is what you predominantly are--this has got to be stopped. This is the second time you've been back here in ten units."

"Mmm," I swam around a bit and smiled at him with my emotional response wires.

The Q-R went away, and someone came and asked me what I wanted to come out as, and by then, you see, I'd anti-Hergaled myself. How drumdik it would be if people actually thought I was Hergall! What with that, and that floopy bee swooning in my hair . . . I showed them the new me. As usual it was depressingly lithe and glamorous. Hatta, and lots of other people I know, nearly always makes a point of having a fat body once in a while, or spots or something. Anyhow, this me was willow-waisted, with an exotic bust and long, long scarlet hair. I got into it, and it felt so odd I had to go somewhere quiet and have an ecstasy pill, and forget about it for a while.

Hatta found me not long after.

"Ooma Hatta," I purred. Everyone always looks nice when you're in ecstasy, even Hatta, who was being fat and spotty just now, with three eyes.

"Attlevey, ooma. Groshing again, I see. Don't you ever get a mite ill with it?"

"I'll take you for a meal. It must be coming up to some eating time or other, isn't it?"

"Well, I'm hungry. I drowned just after meal three, and this new body hadn't had a thing."

We went out, Hatta holding me up--I was extremely ecstatic--and rolled on to the float-bridge. My awful, beastly bee came rushing out after us. I just couldn't get rid of the thing. It fell on Hatta this time.

"Onk!" said Hatta, typically and nauseatingly mild about what happens to him. I threw the bee off the bridge, but it came back again. "Let's go to the Fire-Pit."

The Fire-Pit, they say, is absolutely the place to go if you're feeling low. I almost cheered up, but, in the end, just before we got there, my Neurotic Need asserted itself and I had to get off the bridge and go steal something. It was alive, this thing, with long white fur and big orange eyes. Its whiskers got tangled up in my hair, and I gave it to my bee to hold a second or so before I got hysterical.

We jumped off the bridge, and fell about twenty feet until the electricity wave-net of the Fire-Pit neatly caught us. Hatta looked apologetic. In the Fire-Pit everything burns with scarlet fire. The tables float in flames, non-hot of course, and fireballs bounce gently in the plates. I matched.

I'd calmed down now anyway, but he shoved another ecstasy pill into my mouth, just in case, and then had to carry me to a couch.

"What will you have, dear?" Hatta asked kindly.

I winced at his un-Jang vocabulary, hoping no one had overheard.

We had a large nut steak on fire, with all sorts of burning fruit stuck out of it on burning skewers. Hatta carved with the molecule needle knife and did it all wrong, but we got something to eat eventually. Ecstasy was wearing off by then.

"I hear," Hatta mumbled through steak, "that you've had Hergal officially cut out."

Hatta went on eating for a while. Our bottle of fire-and-ice arrived and he sniffed it and tasted it and stared up at the fiery ceiling.

"Eight-first Rorl, I shouldn't wonder," Hatta said. I fingered a skewer, but Hatta only murmured: "Er, I really admit you're looking groshing."

"The thing is," Hatta said nervously, "I haven't had love for two units now, and I wondered if perhaps we could get married for the afternoon."

"Not with you looking like that we couldn't," I said. Well, I mean. Outraged pimples and a couple of tons descending on you with three yellow pupil-less eyes to watch the effect.

"Look," Hatta encouraged me, "can't you see that it's an Essential Experience to have love with a body you're not really attracted to?"

"Why?" No, I wasn't going to be bamboozled with Jang Essential Experience jargon, particularly from reactionary old Hatta.

We were interrupted. Kley and Danor had arrived with a pet animal that immediately started a fight with my white, stolen thing, and therefore with my bee. In the confusion they drew up floating fire couches and helped themselves to our nut steak. They were both male this time, with long iridescent hair, and Danor had those silly wings like Hergal's and kept knocking things off the table with them.

They vaguely greeted me and began chatting with Hatta.

I stood up, got my white furry animal under one arm, and drained my third goblet of fire-and-ice.

"Thank you for a wonderful fourth meal, Hatta," I gushed. "I'll see you next body."

Outside it was one of those depressing blue-crystal-golden-drops-of-sunlight afternoons. The weather is always perfect at Four BEE, but now and then the Jang manage to sabotage something, and we get a groshing, howling sandstorm come sweeping in past the barrier beams to cheer us all up. I'll never forget the time Danor and I, both female then, I might add, disabled the robot controller at Lookout 9A and let in a down-pour of volcanic ash from one of the big black mountains outside, floods of it for units and units--everything went zaradann. They had to deliver food by bird-plane, and the roads were full of robots trying to dig us all out. We even achieved an earthquake once. Nothing fell down, of course, though we all hoped the Robotics Museum would. Hergal and I were sitting in a big crystal tower at the time, unsuccessfully having love telepathically, and it shook like jelly, which was more than we were doing.

I went to a call-post and had my new body flashed out, so my friends (?) would recognize me. I put a scanner on the Zeefahr and waited for ages to see if Hergal would hurtle out of the sky on to it, but he didn't. So I signaled Thinta.

"Attlevey," I said when her three-dimensional female image appeared in front of me. She looked nice, pleasantly plump, with big green eyes and sort of furry hair. She hadn't changed for ages. Stability at last.

"Oh attlevey, ooma, I was just making a water dress."

She held it up, greenly opalescent and gently dripping.

"Thinta," I said, "I've just been drowned and come back like this, and I'm absolutely droad."

"Oh, I didn't know it was you," Thinta said. She obviously hadn't seen the flash yet. "Well, ooma, why don't you go to one of the Dream Rooms? Wait a split and I'll be with you." She vanished.

Thinta liked the Dream Rooms, though it was reckoned to be pretty anti-Jang really. You always met lots of Older People with "set ideas" who told you you shouldn't be there, but out having love and ecstasy or sex changes or Sense Distortion, like all young people are usually rigidly expected to have. I went into Jade Tower to steal some jewelery while I waited for her to come gamboling down in her miniature safe pink bird-plane.

Stealing is an absolute art, and one of my few simple pleasures.

There's a big dragon in Jade Tower, bred on some farm near Four BAA. It rattles its jade-plated scales at you, and green fire comes out of its mouth and gives you a really invigorating, pine-scented, all-over shower. I've always liked the dragon. It stirs me in an odd romantic way. I once sat in its nice warm mouth for ages and tried to get Kley to rescue me, but he just took an ecstasy pill and rudely collapsed. I think I'd embarrassed him.

I got into its right ear for a while--it looks like a shell inside--and thought about what I might like to steal, while the dragon roared and sprayed away at everybody.

Biting the Sun: A Novel (Paperback)

Descrizione libro Paperback. Condizione: New. Language: English. Brand new Book. In a world dedicated to pleasure, one young rebel sets out on a forbidden quest. Published for the first time in a single volume, Tanith Lee's duet of novels set in a hedonistic Utopia are as riveting and revolutionary as they were when they first appeared two decades ago. It's a perfect existence, a world in which no pleasure is off-limits, no risk is too dangerous, and no responsibilities can cramp your style. Not if you're Jang: a caste of libertine teenagers in the city of Four BEE. But when you're expected to make trouble--when you can kill yourself on a whim and return in another body, when you're encouraged to change genders at will and experience whatever you desire--you've got no reason to rebel . . . until making love and raising hell, daring death and running wild just leave you cold and empty. Ravenous for true adventures of the mind and body, desperate to find some meaning, one restless spirit finally bucks the system--and by shattering the rules, strikes at the very heart of a soulless society. . . . Codice articolo BZE9780553581300