Articoli correlati a The Theatrical Notebooks of Samuel Beckett: Krapp's... 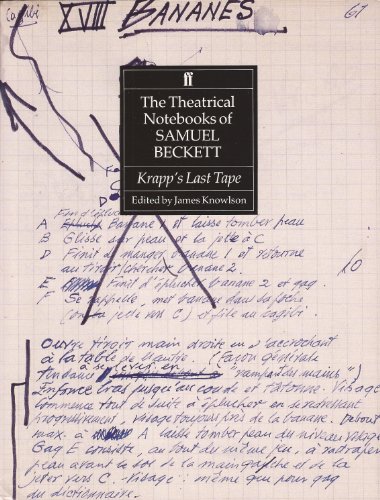 Samuel Beckett directed "Krapp's Last Tape" on four separate occasions, and this volume offers a facsimile of his 1969 Schiller-Theater notebook. The notebook contains what is probably some of the most explicit analysis by Beckett of his own work ever revealed. The revised text incorporates many of the changes Beckett made in the 1969 Schiller production, as well as subsequent changes in later productions. Professor Knowlson worked closely with Beckett over these revisions - and deviations from the original are noted and explained in detail.

Descrizione libro Faber and Faber Ltd, 1992. Condizione: Good. A+ Customer service! Satisfaction Guaranteed! Book is in Used-Good condition. Pages and cover are clean and intact. Used items may not include supplementary materials such as CDs or access codes. May show signs of minor shelf wear and contain limited notes and highlighting. Codice articolo 0571145639-2-4