Articoli correlati a The Rise and Fall of British Liberalism: 1776-1988 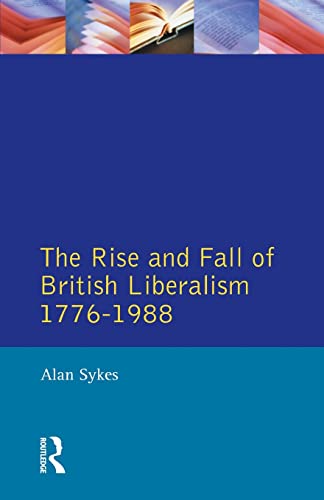 Here is the first book to cover the history of British Liberalism from its founding doctrines in the later eighteenth century to the final dissolution of the Liberal party into the Liberal Democrats in 1988. The Party dominated British politics for much of the later nineteenth-century, most notably under Gladstone, whose premierships spanned 1868-1894, and during the early twentieth, but after the resignation of Lloyd George in 1922 the Liberal Party never held office again. The decline of the Party remains a unique phenomenon in British politics and Alan Sykes illuminates its dramatic and peculiar circumstances in this comprehensive study.

Introduction: The Liberal Outlook.
1. The Liberal Party: A Question of Origins.
2. Mid Victorian Liberalism.
3. Gladstone, Whigs and Radicals.
4. The Complications of Ireland and Empire.
5. Conservatism, Labour and the First Downfall of the Liberal Party.
6. Welfare, Finance and Freedom.
7. Rumours of a Strange Death.
8. Lloyd George and Coalitionism.
9. The End of Liberal Politics.
10. Reflections.
A Guide to Future Reading.