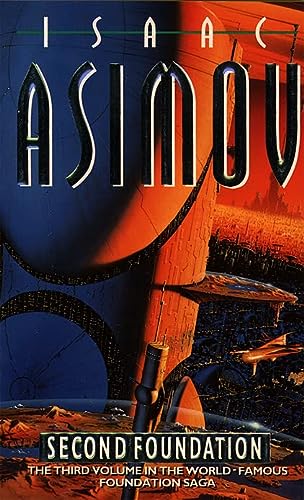 WINNER OF THE HUGO AWARD FOR BEST ALL-TIME SERIES

The Foundation series is Isaac Asimov’s iconic masterpiece. Unfolding against the backdrop of a crumbling Galactic Empire, the story of Hari Seldon’s two Foundations is a lasting testament to an extraordinary imagination, one whose unprecedented scale shaped science fiction as we know it today.

The First Foundation has been defeated, crushed by the formidable mental powers of the Mule. But whispers of the mysterious Second Foundation, the only hope of defeating the Mule, are beginning to spread...

‘One of the most staggering achievements in modern SF’
The Times

‘Isaac Asimov was one of the great explainers of the age...It will never be known how many practicing scientists today, in how many countries, owe their initial inspiration to a book, article, or short story by Isaac Asimov’
Carl Sagan

Isaac Asimov was born in 1920 in Russia and was brought to the USA by his parents three years later. He grew up in Brooklyn and attended Columbia University. After a short spell in the army, he gained a doctorate and worked in academia and chemical research.

Asimov’s career as a science fiction writer began in 1939 with the short story ‘Marooned Off Vesta’. Thereafter he became a regular contributor to the leading SF magazines of the day. Asimov wrote hundreds of short stories and novels, including the iconic I, Robot and Foundation. He won the Hugo Award four times and the Nebula Award once.

Apart from his world-famous science fiction, Asimov also wrote highly successful detective mystery stories, a four-volume History of North America, a two-volume Guide to the Bible, a biographical dictionary, encyclopaedias, and textbooks, as well as two volumes of autobiography.