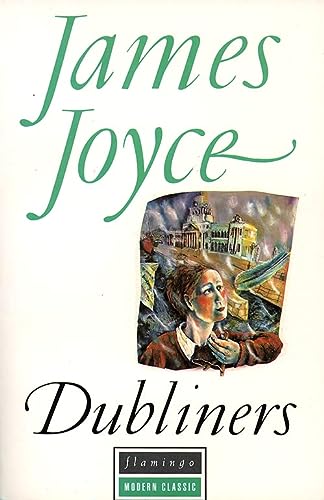 Published in 1914, the original printers destroyed the book on the grounds that it was libellous, indecent and blasphemous. It is a collection of short stories about Dublin life - tales of ordinary men and women made extraordinary by the eye of Joyce's genius.

James Augustine Aloysius Joyce (1882–1941) was an Irish writer and poet, widely considered to be one of the most influential writers of the 20th century. Along with Marcel Proust, Virginia Woolf, and William Faulkner, Joyce is a key figure in the development of the modernist novel. He is best known for his landmark novel Ulysses (1922). Other major works are the short-story collection Dubliners (1914), and the novels A Portrait of the Artist as a Young Man (1916) and Finnegans Wake (1939). Although most of his adult life was spent outside the country, Joyce's Irish experiences are essential to his writings and provide all of the settings for his fiction and much of their subject matter. In particular, his rocky early relationship with the Irish Catholic Church is reflected by a similar conflict in his character Stephen Dedalus, who appears in two of his novels. His fictional universe is firmly rooted in Dublin and reflects his family life and the events and friends (and enemies) from his school and college days; Ulysses is set with precision in the real streets and alleyways of the city. As the result of the combination of this attention to one place and his voluntary exile in continental Europe, most notably in Paris, Joyce paradoxically became both one of the most cosmopolitan yet most regionally focused of all the English language writers of his time.

Published in 1914, 'Dubliners' was Joyce's first major work, written whilst living in self-imposed exile in Trieste. A collection of fifteen short stories dealing with fleeting episodes in the everyday lives of ordinary Dubliners, it forms what Joyce called 'a chapter of moral history... the first step toward the spiritual liberation of my country.'

Written in a frank, realistic style of 'scrupulous meanness', 'Dubliners' is a key landmark in the development of modern narrative prose. Following his master, Flaubert, and building on his earlier 'epiphanies' (attempts at directly reproducing moments of heightened experience), Joyce tried to eliminate the moralising, explaining authorial voice that had dominated nineteenth century fiction, composing his narrative solely from the speech and perceptions of his characters. From the opening story, in which a young boy attending a priest's funeral suddenly becomes aware of the emptiness of religious ritual, to the final, wistful tale of long-married Gretta Conroy, still grieving for her first young love, Joyce paints an intense and extraordinary portrait of lives full of desire, warmth and longing, transcending the country's stifling Catholicism and strict social conformity.

An undisputed masterpiece of twentieth century literature, 'Dubliners' is Joyce's homage to the city which first inspired and nurtured his creative spirit.