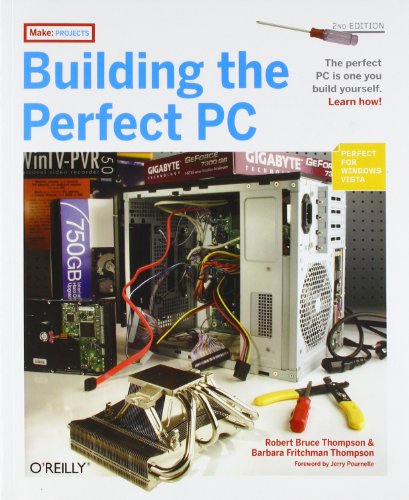 This popular Build-It-Yourself (BIY) PC book covers everything you want to know about building your own system: Planning and picking out the right components, step-by-step instructions for assembling your perfect PC, and an insightful discussion of why you'd want to do it in the first place. Most big brand computers from HP, Dell and others use lower-quality components so they can meet their aggressive pricing targets. But component manufacturers also make high-quality parts that you can either purchase directly, or obtain through distributors and resellers. Consumers and corporations alike are opting to build rather than buy PCs to ensure high quality and compatibility.

The new edition of Building the Perfect PC shows you how to construct a variety of top-flight systems with the latest technology, including AMD Socket AM-2 and Intel Core 2 processors, that are Vista- and Linux-ready. The book includes several new options, including:

Regardless of your technical experience, Building the Perfect PC will guide you through the entire process of building or upgrading your own computer. You'll use the latest top-quality components, including Intel's Core 2 Duo and AMD's Athlon X2 CPUs. And you'll know exactly what's under the hood and how to fix or upgrade your PC, should that become necessary. Not only is the process fun, but the result is often less expensive and always better quality and far more satisfying than anything you could buy off the shelf.

Robert Bruce Thompson is a coauthor of Building the Perfect PC, PC Hardware Buyer's Guide, Astronomy Hacks, and PC Hardware in a Nutshell. Robert built his first computer in 1976 from discrete chips. It had 256 bytes of memory, used toggle switches and LEDs for I/O, ran at less than 1MHz, and had no operating system. Since then, he has bought, built, upgraded, and repaired hundreds of PCs for himself, employers, customers, friends, and clients. Robert reads mysteries and nonfiction for relaxation, but only on cloudy nights. He spends most clear, moonless nights outdoors with his 10-inch Dobsonian reflector telescope, hunting down faint fuzzies, and is currently designing a larger truss-tube Dobsonian (computerized, of course) that he plans to build.

Barbara Fritchman Thompson is a coauthor of Building the Perfect PC, PC Hardware Buyer's Guide, Astronomy Hacks, and PC Hardware in a Nutshell. Barbara worked for 20 years as a librarian before starting her own home-based consulting practice, Research Solutions, and is also a researcher for the law firm Womble, Carlyle, Sandridge, & Rice, PLLC. During her leisure hours, Barbara reads, works out, plays golf, and, like Robert, is an avid amateur astronomer.