Articoli correlati a Framing the Sign: Criticism and Its Institutions

Culler, Jonathan Framing the Sign: Criticism and Its Institutions 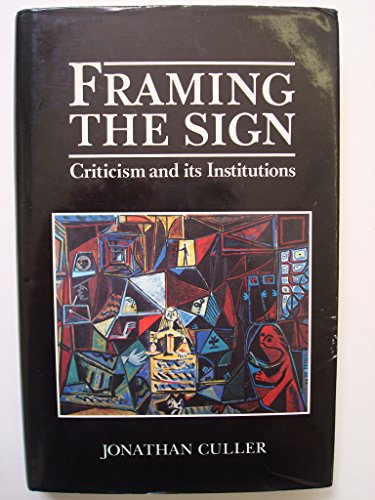 Theory has drawn to the study of literature many distinct fields; but it has also now widened its brief substantially to include many hitherto non-literary issues. To interpret the "sign" now involves "framing" it - setting it up, rigging it, actively setting it off against its surrounds; in this book the author sets out to frame the frames of contemporary criticism. Beginning with a substantial historical overview of the relationship between criticism and the academy, he moves on to explore what has come to characterize contemporary theory - its preoccupation with ideology, the "call to history" - with a polemical examination of Michel Foucault and Terry Eagleton. Out of this emerges the author's own idea of what forms political criticism might take, and, with a new look at William Empson, he takes to task the unchallenged immunity that pseudo-Christian ideology enjoys in our views of literature. The book also includes a major reassessment of the impact made by one of the last twenty years' most important critical voices, that of Paul de Man. In lighter vein, it gives us a semiological look at the worlds of junk and tourism, as well as legal rhetoric. The book also gives considered attention to the problems of language and context in Habermas' influential attempt to infer norms from communicative practice.