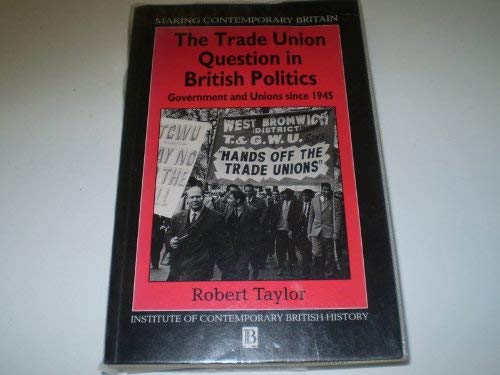 This lucid and infiormative book examines the changing relationship between the trade unions and British governments from the making of the social settlement of 1944-1945 to the post-Thatcherite era of the Conservative political domination of the early 1990s.
The trade unions were a central issue in Britain's post-war politics. Criticised by many as being too powerful and a negative force on the economic development of the country, they posed a recurrent problem for successive British governments - both Labour as well as Conservative - as they sought to resolve the troubles of an economy in relative decline.

Robert Taylor is the employment correspondent of The Financial Times. He was formerly labour editor of the Observer from 1976 to 1987 and between 1988 and 1992 he was Nordic correspondent of The Sunday Times and then the Observer. He is the author of numerous books, including The Fifth Estate: Britain's Trade Unions in the Modern World and Workers in the New Depression.

THE TRADE UNION QUESTION IN BRIT