Articoli correlati a A History of English Words 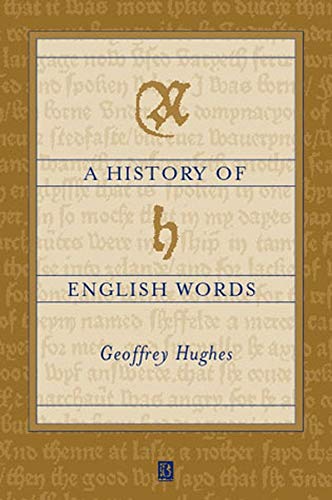 This book traces the remarkable reconfigurations that English lexis has undergone in the past millennium. The vocabulary is studied as an indicator of social change, a symbol reflecting different social dynamics between speech communities, on models of dominance, cohabitation, colonialism and globalisation.

"Do not misprise this book by dipping into it; begin respectfully at the beginning and follow the signs, all the way from ancient kings to modern cabbages, through a long cultural tale that documents the words of Saxons and saints, soldiers and scholars, poets and politicians, admen, journalists, junkies and all that jazz. The compelling power of it is in the detail, and all the details are delightful." Walter Nash, University of Nottingham


"Geoffrey Hughes′s book deals authoritatively with the origin and history of groups of English words from the eighth century to the end of the twentieth and also with the emergence of the first English dictionaries and of all the major ones that have been published since the early seventeenth century. It is packed with tables displaying the dates of first records, and the interconnections of all types of vocabulary from the most technical to the most colloquial. It will be of particular interest to members of the general public, to students embarking on an investigation of our language in the UK, the USA and other English–speaking countries, and to learners of the language elsewhere in the world." Robert Burchfield, Editor of A Supplement to the OED, four volumes 1972–86

"This book has many useful things for the language teacher, of which three stand out: First: it offers insights into our language – its history, where its words come from and how they evolved. Second: it provides information on language syllabus topics; for example, register, word formation and roots. The third thing is enjoyment. I have read this book straight through twice, and dipped into various sections of it many times – it is as entertaining as it is informative. Hughes′ writing has the lightness of touch and imagination that come from long and profound engagement with his subject. There is vast learning, lightly worn, in this book." Modern English Teacher

"Socialinguists will find the work a useful departure point for research and teaching, particularly where it deals with areas outside their current expertise, and students and generalists will find it a good read and highly informative throughout." Elizabeth Falsberg, English, University of Washington.

Geoffrey Hughes is Professor of the History of the English Language at the University of the Witwatersrand in Johannesburg, South Africa. A graduate of Oxford University, he has held academic and research posts at Cape Town, Harvard and Turin. His main interests are in historical semantics and sociolinguistics on which he has written over twenty papers and two books, Words in Time (Blackwell, 1988) and Swearing (Blackwell, 1991). He is a consultant for the Collins Dictionaries on South African English and has been editor of the journal English Studies in Africa.

A History of English Words (Paperback)

Descrizione libro Paperback. Condizione: New. Revised ed. Language: English. Brand new Book. This book traces the remarkable reconfigurations that English lexis has undergone in the past millennium. The vocabulary is studied as an indicator of social change, a symbol reflecting different social dynamics between speech communities, on models of dominance, cohabitation, colonialism and globalisation. * Comprehensive guide to the evolution of the English vocabulary. * Well known passages from literature are used to illustrate the variety of English words. * Accessible discussion of Latin, Greek, Germanic and Norman--French languages. * Contains original research into the make--up of the current lexical core of English. Codice articolo AAH9780631188551

Descrizione libro Paperback / softback. Condizione: New. New copy - Usually dispatched within 4 working days. This book traces the remarkable reconfigurations that English lexis has undergone in the past millennium. The vocabulary is studied as an indicator of social change, a symbol reflecting different social dynamics between speech communities, on models of dominance, cohabitation, colonialism and globalisation. Codice articolo B9780631188551