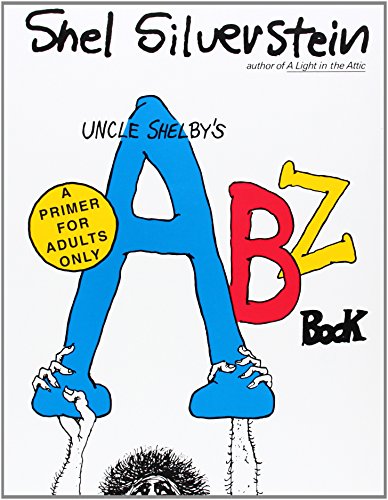 Shel Silverstein is best known as a children’s book author who wrote and illustrated a number of bestselling books that have charmed millions of readers of all ages. Crossing many artistic boundaries, he was also a noted songwriter and an accomplished playwright. Silverstein first came to prominence in the 1950s as a cartoonist for Playboy, where he assumed the role of roving ambassador for the up-and-coming magazine. This esteemed assignment—due in no small part to his friendship with Hugh M. Hefner—was the auspicious beginning of a most amazing career. Shel Silverstein died in 1999.

A is for apple

How many nice green apples can you eat?

Make a circle around the number of nice green little apples you ate today.

B is for baby

The baby is fat

The baby is pink

The baby can cry

The baby can laugh

Mommy loves the baby more than she loves you.

Z is for zoo

Let's go to the zoo

See all the animals!

The animals are locked inside the cages.

Who will let them out???

See the elephant in the zoo. Give the nice elephant some peanut shells with pepper inside. That will be a good joke on him. Ha. Ha. Ha Ha. The elephant is mad but don't worry -- By tomorrow the elephant will have forgotten all about it.

Poor hippopotomus. The hippopotumos has a bone stuck in his throat and can't get it out. Poor hipopothomus the hipopottomos has no fingers like you do. Poor hipotopomus. Say, maybe he is not a real hiptopomos after all. Maybe he is really a royal prince that has been turned into a hipopotomos by a wicked witch and when some person takes the bone out of his throat the spell will be broken and he will turn back into a prince again and give whoever did it a million dollars in gold and a horse and a castle.

See the hippopotimus in the zoo

2. Uncle Shelby's ABZ Book: A Primer for Adults Only

3. Uncle Shelby's ABZ Book: A Primer for Adults Only

4. Uncle Shelby's ABZ Book: A Primer for Adults Only