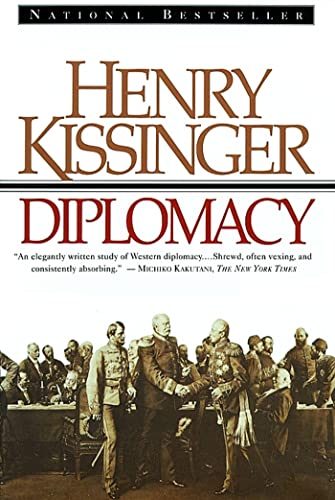 A brilliant, sweeping history of diplomacy that includes personal stories from the noted former Secretary of State, including his stunning reopening of relations with China.

The seminal work on foreign policy and the art of diplomacy.

Moving from a sweeping overview of history to blow-by-blow accounts of his negotiations with world leaders, Henry Kissinger describes how the art of diplomacy has created the world in which we live, and how America’s approach to foreign affairs has always differed vastly from that of other nations.

Brilliant, controversial, and profoundly incisive, Diplomacy stands as the culmination of a lifetime of diplomatic service and scholarship. It is vital reading for anyone concerned with the forces that have shaped our world today and will impact upon it tomorrow.

Simon Schama The New Yorker Kissinger's absorbing book tackles head-on some of the toughest questions of our time....Its pages sparkle with insight.

George P. Shultz This is a great book....Brilliant in its analysis and masterly in its sweep.

Arthur Schlesinger, Jr. This rich and absorbing work is both a brilliant study of the international crises that have shaped the modern world and a provocative meditation on the American style in foreign affairs.

Henry A. Kissinger has served as National Security Adviser and as Secretary of State and has received the Nobel Peace Prize, the Presidential Medal of Freedom, and the Medal of Liberty, among other awards. A former professor at Harvard and the author of many books, he lives in New York City.

Descrizione libro Paperback. Condizione: New. Reprint. Language: English. Brand new Book. 'Kissinger's absorbing book tackles head-on some of the toughest questions of our time .Its pages sparkle with insight' Simon Schama in the NEW YORKER Spanning more than three centuries, from Cardinal Richelieu to the fragility of the 'New World Order', DIPLOMACY is the now-classic history of international relations by the former Secretary of State and winner of the Nobel Peace Prize. Kissinger's intimate portraits of world leaders, many from personal experience, provide the reader with a unique insight into what really goes on -- and why -- behind the closed doors of the corridors of power. 'Budding diplomats and politicians should read it as avidly as their predecessors read Machiavelli' Douglas Hurd in the DAILY TELEGRAPH 'If you want to pay someone a compliment, give them Henry Kissinger's DIPLOMACY .It is certainly one of the best, and most enjoyable [books] on international relations past and present .DIPLOMACY should be read for the sheer historical sweep, the characterisations, the story-telling, the ability to look at large parts of the world as a whole' Malcolm Rutherford in the FINANCIAL TIMES. Codice articolo AAZ9780671510992