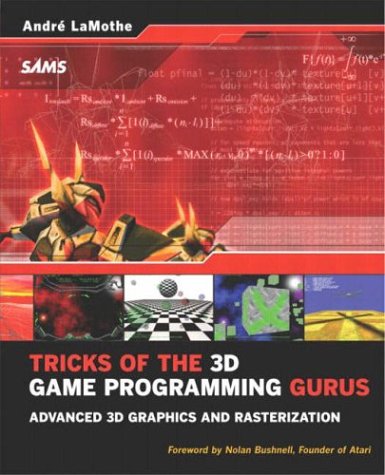 Today is the greatest time in history to be in the game business. We now have the technology to create games that look real! Sony's Playstation II, XBOX, and Game Cube are cool! But, all this technology isn't easy or trivial to understand - it takes really hard work and lots of Red Bull. The difficulty level of game programming has definitely been cranked up these days in relation to the skill set needed to make games. Andre LaMothe's follow-up book to Tricks of the Windows Game Programming Gurus is the one to read for the latest in 3D game programming. When readers are finished with Tricks of the 3D Game Programming Gurus-Advanced 3D Graphics and Rasterization, they will be able to create a full 3D texture-mapped, lit video game for the PC with a software rasterizer they can write themselves. Moreover, they will understand the underlying principles of 3D graphics and be able to better understand and utilize 3D hardware today and in the

André LaMothe has been involved in the computing industry and technology for more than a quarter century. He holds degrees in mathematics, computer science, and electrical engineering, and is one of the rare individuals that actually did work at NASA at the age of 20 doing research. His early teens and twenties were filled with consulting for numerous Silicon Valley companies, where he learned the realities of running a business and worked on his multidisciplinary background in fields such as telecommunications, virtual reality, robotics, compiler design, 3D engines, artificial intelligence, and other areas of computing and engineering.

His company Xtreme Games LLC was one of the first and last true "indie" publishers with a soul. Later he founded the Xtreme Games Developer Conference (XGDC) to give game developers a low-cost alternative to the GDC. Lately he has been working on a number of projects, including eGamezone Networks, an online distribution system for games that's fair, fun, and has zero ads. Last but not least, he founded a new company, Nurve Networks LLC, to create handheld video game systems for value-minded consumers and hobbyists alike. Finally, he is the series editor for the world's largest game development series.

On a personal level, he likes everything extreme, from weightlifting, motorcycles, jet skis, and hotrods to "railing" on his blades. He has even trained extensively with the Shamrock Submission Fighting Team under the tutelage of Crazy Bob Cook, Frank Shamrock, and Javier Mendez. You probably don't want to get in an argument with him over DirectX or OpenGL - right or wrong, he will probably make you say uncle!

1. Tricks of the 3D Game Programming Gurus-Advanced 3D Graphics and Rasterization (Other Sams)

2. Tricks of the 3D Game Programming Gurus-Advanced 3D Graphics and Rasterization (Other Sams)