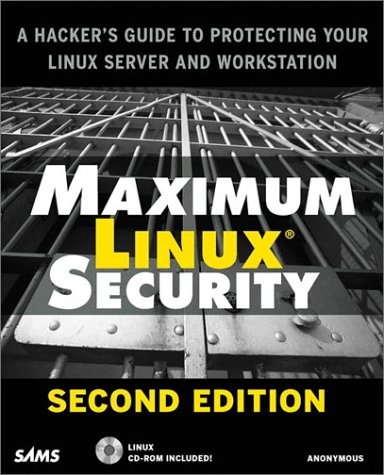 Given the subtitle, A hacker's guide to protecting your Linux server and workstation, it is hardly surprising that the author remains anonymous except for the fact that he is a California computer criminal turned security consultant. He covers Linux security basics; and user, network, and Internet security. Appendices include specifics on Linux and Unix security utilities and applications. The CD-ROM features Linux security tools. No date is given for the first edition. Ray is also a security consultant. Annotation c. Book News, Inc., Portland, OR (booknews.com)

Anonymous is a self-described Unix and Perl fanatic who lives in southern California with his wife Michelle and a half-dozen computers. He currently runs an Internet security consulting company and is at work building one of the world's largest computer security archives. He also moonlights doing contract programming for several Fortune 500 firms.

John Ray is an award-winning developer and security consultant with more than 16 years of programming and administration experience. He has worked on projects for the FCC, The Ohio State University, Xerox, and the state of Florida, as well as serving as IT Director for Blue Cosmos Design, Inc. Ray has written/contributed to more than 10 titles currently in print, ranging from Using TCP/IP: Special Edition to Sams Teach Yourself Dreamweaver UltraDev 4 in 21 Days.