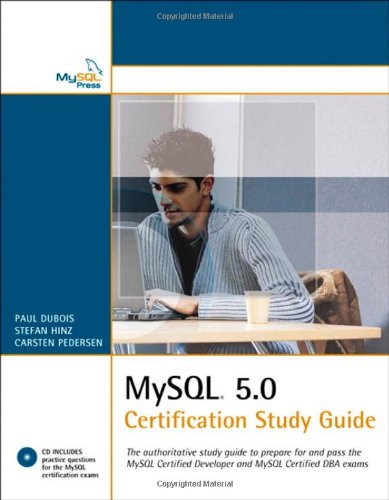 An updated manual for those preparing for the two MySQL certification tests for MySQL 5 covers the principles, concepts, and techniques of the open-source database program to prepare for the core certification examinations, covering such areas as database management, installation, security, optimization, data types, client/server concepts, and disaster prevention. Original. (Advanced)

Paul DuBois is the leading author of books on MySQL topics. His book, entitled MySQL, is widely considered the definitive work on MySQL. He is a developer for MySQL AB, where he edits and maintains the official English-language documentation for MySQL. Stefan Hinz is leads the MySQL documentation team, is a MySQL trainer and consultant, and the German translator of the MySQL Reference Manual. He is also the translator of Paul's MySQL Cookbook (O'Reilly and Associates) and translator and author of MySQL-related German books. Stefan passed the MySQL Certification exam before he joined MySQL AB.

Certcities.com lists the MySQL certification as one of the top 10 certifications to grow in 2005. MySQL professionals need a way to distinguish themselves from the vast majority of database administrators and developers. With more than 4 million active installations, MySQL is the world's most popular open-source database. Known for its speed, reliability and case of use, MySQL has become a low-cost alternative to expensive database systems such as Oracle, IBM and Microsoft. MySQL AB has aggressively improved the feature set of MySQL with MySQL 5, making it more suitable for enterprise-level applications and uses. The MySQL certification tests, available at over 3,000 PearsonVUE testing centers, is a key component of this enterprise growth strategy, establishing a base level of skills for database users, administrators and programmers.

The MySQL Core Certification is aimed at the database user who wants proof of his or her abilities in such fundamental areas as SQL, data entry and maintenance, and data extraction. The MySQL Professional Certification test is designed for the advanced user who wants to prove his or her knowledge in such areas as database management, installation, security, disaster prevention and optimization. Both tests are thoroughly covered in the MySQL 5.0 Certification Study Guide. Written by Paul DuBois, the leading author of books on MySQL topics, and reviewed for technical accuracy by MySQL AB, this book is the fastest, most reliable way for MySQL users, developers, and administrators to prepare for either of the MySQL tests.