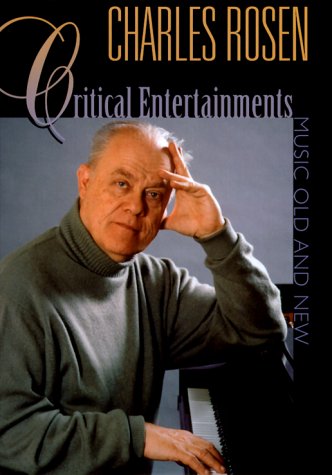 An extraordinarily gifted musician and writer, Charles Rosen is a peerless commentator on the history and performance of music. Critical Entertainments brings together many of the essays that have established him as one of the most influential and eloquent voices in the field of music in our time.

These essays cover a broad range of musical forms, historical periods, and issues--from Bach through Brahms to Carter and Schoenberg, from contrapuntal keyboard music to opera, from performance practices to music history as a discipline. They revisit Rosen's favorite subjects and pursue some less familiar paths. They court controversy (with strong opinions about performance on historical instruments, the so-called New Musicology, and the alleged "death" of classical music) and offer enlightenment on subjects as diverse as music dictionaries and the aesthetics of stage fright. All are unified by Rosen's abiding concerns and incomparable style. In sum, Critical Entertainments is a treasury of the vast learning, wit, and insight that we have come to expect from this remarkable writer. It will delight all music lovers.

Charles Rosen is a pianist and Professor Emeritus of Music and Social Thought at the University of Chicago. In addition to The Classical Style, which won the National Book Award, his previous books include Sonata Forms and Romanticism and Realism (with Henri Zerner).