Articoli correlati a The Nazi-Fascist New Order for European Culture 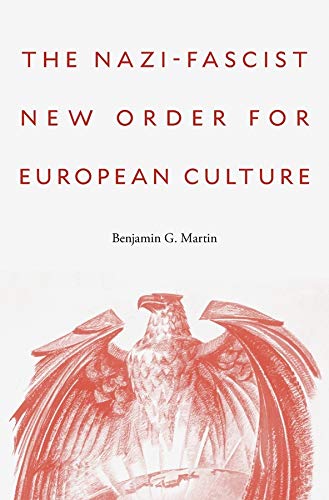 Following France’s crushing defeat in June 1940, the Nazis moved forward with plans to reorganize a European continent now largely under Hitler’s heel. While Germany’s military power would set the agenda, several among the Nazi elite argued that permanent German hegemony required something more: a pan-European cultural empire that would crown Hitler’s wartime conquests. At a time when the postwar European project is under strain, Benjamin G. Martin brings into focus a neglected aspect of Axis geopolitics, charting the rise and fall of Nazi-fascist “soft power” in the form of a nationalist and anti-Semitic new ordering of European culture.

As early as 1934, the Nazis began taking steps to bring European culture into alignment with their ideological aims. In cooperation and competition with Italy’s fascists, they courted filmmakers, writers, and composers from across the continent. New institutions such as the International Film Chamber, the European Writers Union, and the Permanent Council of composers forged a continental bloc opposed to the “degenerate” cosmopolitan modernism that held sway in the arts. In its place they envisioned a Europe of nations, one that exalted traditionalism, anti-Semitism, and the Volk. Such a vision held powerful appeal for conservative intellectuals who saw a European civilization in decline, threatened by American commercialism and Soviet Bolshevism.

Taking readers to film screenings, concerts, and banquets where artists from Norway to Bulgaria lent their prestige to Goebbels’s vision, Martin follows the Nazi-fascist project to its disastrous conclusion, examining the internal contradictions and sectarian rivalries that doomed it to failure.

"As Benjamin G. Martin shows in his bold and impressive book, Germany, in close collaboration with Mussolini's Italy, tried to recast European culture in accordance with their ideological aims... A work of great originality

"A pathbreaking history of the ways in which Hitler and Mussolini used cultural claims to cement cooperation between their two regimes and to create a distinct European nationalist identity. A gripping account of bitter rivalries as well, between different artistic movements and art forms and between Germany and Italy as the fortunes of their respective fascist projects diverged." --Patricia Clavin, University of Oxford

"This revelatory book maps a virtually undiscovered aspect of Europe under Nazi and Fascist hegemony: the attempt to create pan-European cultural institutions for film, music, and literature. This enterprise required a redefinition of what Europe meant for the Nazis, the Fascists, and for the extreme right in virtually every European country. Martin s transnational approach is without doubt a major contribution to a new generation of scholarship about fascism and modernity." --Anson Rabinbach, Princeton University

"Martin's unique book exposes how the idea of Europe was hijacked by German and Italian fascists on behalf of authoritarian and illiberal politics, a politics rooted in an ideology of racial purity and an intolerant anti-modernist cultural aesthetic. As Europe now faces the renewal of nationalism and xenophobia, Martin provides an indispensable but sobering historical critique of any facile belief in some inherent affinity between cultural traditions and tolerance, humanism and pluralism." --Leon Botstein, Bard College

Descrizione libro 2016. Condizione: NEW. 9780674545748 This listing is a new book, a title currently in-print which we order directly and immediately from the publisher. For all enquiries, please contact Herb Tandree Philosophy Books directly - customer service is our primary goal. Codice articolo HTANDREE01189039

Descrizione libro 2016. Hardcover. Condizione: New. Hardcover. Following France's crushing defeat in June 1940, the Nazis moved forward with plans to reorganize a European continent now largely under Hitler's heel. While Germany's military power would.Shipping may be from multiple locations in the US or from the UK, depending on stock availability. 336 pages. 0.748. Codice articolo 9780674545748

Descrizione libro 2016. Hardcover. Condizione: New. Hardcover. Following France's crushing defeat in June 1940, the Nazis moved forward with plans to reorganize a European continent now largely under Hitler's heel. While Germany's militar.Shipping may be from our Sydney, NSW warehouse or from our UK or US warehouse, depending on stock availability. 336 pages. 0.748. Codice articolo 9780674545748