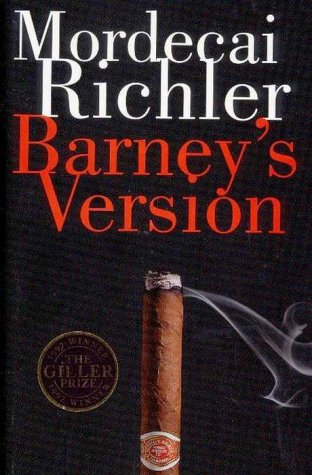 Ebullient and perverse, thrice married, Barney Panofsky has always clung to two cherished beliefs: life is absurd and nobody truly ever understands anybody else. But when his sworn enemy publicly states that Barney is a wife abuser, an intellectual fraud and probably a murderer, he is driven to write his own memoirs. Charged with comic energy and a wicked disregard for any pieties whatsoever, Barney's Version is a brilliant portrait of a man whom Mordecai Richler has made uniquely memorable for all time. It is also an unforgettable love story, a story about family and the riches of friendship.
From the Trade Paperback edition.

"[A] triumph ... at once hilarious, poignant, satiric and elegiac.... Barney's 30-year marriage to Miriam, their mutual love, and the two sons and one daughter they produce ... are the novel's heart and soul... Barney's Version has an embarrassment of riches ... woven here into a wantonly generous, seamless whole." —The Globe and Mail

"I couldn't put it down.... There is no other writer among us at the moment who can so deftly deploy pure dialogue to create such rich atmosphere of period and place.... In Barney's Version, the women are his finest achievement. This is wholly a wonderful novel.... By turns gripping, hilarious, ridiculous and even poignant." —The Montreal Gazette

"A rollicking novel laden with rue, a self- portrait of a creative personality who never found a creative outlet he could respect, a paean to the pleasures and perils of drink, a celebration of ice hockey and tap dancing, a lament for a multicultural Montreal now torn and depressed by Quebeçois separatism and a murder mystery with an uproarious solution." —New Yorker
From the Trade Paperback edition.

Mordecai Richler is the author of ten successful novels-including Barney's Version (1997), Solomon Gursky Was Here (1989), Cocksure (1968) and The Apprenticeship of Duddy Kravitz (1959)-as well as numerous screenplays, essays, children's books and several works of non-fiction. His most recent book is On Snooker (July 28th, 2001). He is the recipient of dozens of literary awards, among them two Governor General's Awards, The Giller Prize and The Commonwealth Writers Prize. He was made a Companion of the Order of Canada in 2001, only several months before his death on July 3rd, 2001.