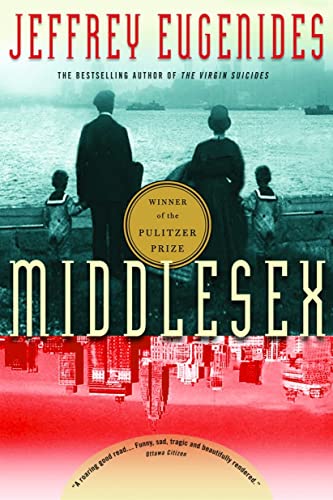 The first words of Jeffrey Eugenides exuberant and capacious novel Middlesex take us right to the heart of its unique narrator: “I was born twice: first, as a baby girl, on a remarkably smogless Detroit day in January of 1960; and then again, as a teenage boy, in an emergency room near Petoskey, Michigan, in August of 1974.”

Middlesex is the story of Cal or Calliope Stephanides, a comic epic of a family’s American life, and the expansive history of a gene travelling down through time, starting with a rare genetic mutation. In 1922, Desdemona and Eleutherios (“Lefty”) Stephanides, brother and sister, leave the war-ravaged village of Bithynios in Asia Minor. With their parents dead and their village almost empty, Desdemona and Lefty have gradually been drawn closer together and fallen in love. As the Turks invade and the Greeks abandon the port of Smyrna, Lefty and Desdemona -- Callie’s grandparents -- escape to reinvent themselves as a married couple in America.

Jeffrey Eugenides recounts the Stephanides family’s experiences over the next fifty years with gusto and delight. Upon their arrival in Detroit, Lefty goes to work at the Ford motor plant and the couple live with Desdemona’s cousin Sourmelina -- a woman with her own secrets -- and her bootlegging husband Jimmy Zizmo. After Jimmy disappears and the Stephanides’ son Milton is born, Lefty opens a speakeasy called the Zebra Room, and Desdemona goes to work tending silkworms for the Nation of Islam.

Milton serves in the Navy in World War II and returns to marry his cousin Tessie, Sourmelina’s daughter, and the errant gene comes closer to expression. Milton takes over the family business and they have two children, Calliope and Chapter Eleven, but as their fortunes rise the city’s fall, and Detroit is torn by riots with the intensity of warfare. The family moves into a new home called Middlesex in a tony suburb, and Calliope, who had been a beautiful little girl, is sent to private school.

So begins one of the strangest, most affecting adolescences in literature. As time passes Calliope gets taller and gawkier without developing into womanhood. Her classmates’ bodies change and they grow interested in boys; Callie remains flat-chested and waits in vain for her first period. And she has a curiously intense friendship with a girl at her school, the beautiful and confident Obscure Object of Desire.

It is only when she has an accident at the Obscure Object’s summer house and is examined by an emergency room doctor that Callie and her parents discover that she isn’t like other girls. She is referred to an eminent New York doctor who, after extensive physical and psychological testing, pronounces her genetically male: 5-alpha-reductase deficiency syndrome caused her true genital characteristics to remain hidden until puberty. Callie is a hermaphrodite. Since she was raised as a girl, Dr. Luce recommends cosmetic surgery and hormone injections to make her seem more fully female.

But Callie refuses to be something she is not. She runs away, cuts her hair short and hitch-hikes across the country to California, calling himself Cal. And after some difficulties -- and performances in a strip club in San Francisco at the height of sexual liberation -- Cal learns to relish being both male and female. One more unexpected family tragedy, and some old revelations, await in Detroit.

This animated and moving story is narrated by Cal Stephanides, now an American diplomat living in Berlin. While telling us about his past, he fumbles towards a romantic relationship with an artist who might be able to accept him for the unique person he is.

"This novel is longer, more populated, sadder, funnier, bigger in every way than its predecessor. What hasn’t changed is what set its author apart in the first place: an empathy and curiosity that ranges across generations and gender, and a willingness to enter heavily mined areas -- especially with regard to sex -- where lesser writers fear to tread.... Eugenides has taken all the trials and joys of the traditional coming-of-age novel and in one fell swoop made them twice (three times?) as rich."
—The Gazette (Montreal)

"Delightful.... infectious... bold... The story is more about genetics than gender confusion, more family saga than freak show.... It’s about the transatlantic journey of a single gene and how the vagaries of love and hate generations removed come to bear on an individual life."
—The Globe and Mail

"[Since The Virgin Suicides] we’ve been wanting a big fat novel that would consume us.... We have it now. I just finished reading it. Middlesex is in every way that big novel."
—The Vancouver Sun

"He has emerged as the great American writer that many of us suspected him of being."
—Jeff Turrentine, Los Angeles Times Book Review

"Sweeps the reader along with easy grace and charm, concealing . . . the ache of earned wisdom beneath bushels of inventive storytelling"
—Adam Begley, The New York Observer

"...an uproarious epic, at once funny and sad, about misplaced identities and family secrets.... Mr. Eugenides has a keen sociological eye for 20th-century American life.... But it's his emotional wisdom, his nuanced insight into his characters' inner lives, that lends this book its cumulative power."
—Michiko Kakutani, The New York Times

"delightful... a big-hearted engine of a novel [with] epic-proportioned emotions and an intelligent, exuberant voice."
—Zsuzsi Gartner, The Globe and Mail

"The pay-off for the reader is huge. Eugenides has taken all the trials and joys of the traditional coming-of-age novel and made them twice (three times?) as rich."
—The Montreal Gazette

"Jeffrey Eugenides’ expansive and radiantly generous second novel ... feels rich with treats, including some handsome writing....One of the delights of Middlesex is how soundly it’s constructed, with motifs and characters weaving through the novel’s various episodes, pulling it tight. The book’s length feels like its author’s arms are stretching farther and farther to encompass more people, more life.... It is a colossal act of curiosity, of imagination and of love."
—The New York Times Review of Books

"Perhaps the most wonderful thing about the book is Eugenides’ ability to feel his way into the girl, Callie, and the man,Cal. It’s difficult to imagine any serious male writer of earlier eras so effortlessly transcending the stereotypes of gender. This is one determinedly literary novel that should also appeal to a large, general audience."
—Publisher's Weekly

"Jeffrey Eugenides is a big and big-hearted talent, and Middlesex is a weird, wonderful novel that will sweep you off your feet."
—Jonathan Franzen

"Wildly imaginative and engrossing . . . [Middlesex] skillfully bends our notions of gender . . . with its affecting characterization of a brave and lonely soul and its vivid depiction of exactly what it means to be both male and female."
—Booklist

Jeffrey Eugenides was born in 1960 in Detroit, Michigan, the son of an American-born father whose Greek parents emigrated from Asia Minor and an American mother of Anglo-Irish descent.

After graduating from Brown University and Stanford University, in 1988 Jeffrey Eugenides published his first short story. His first novel, The Virgin Suicides, was published in 1993 to rapturous acclaim. The compelling, tender and wickedly humorous story of the five Lisbon sisters in “the year of the suicides,” told in a voice representing the eclectic group of men who came under their spell, The Virgin Suicides was an immediate off-beat success. It has been translated into fifteen languages and made into a feature film, and its author was named one of America’s best young novelists by both Granta and The New Yorker.

Middlesex, his second novel, won the Pulitzer Prize, was shortlisted for the National Book Critics Circle Award, and was hailed as a brilliant, original and joyful book by critics and readers alike. The New York Times Book Review described Middlesex as a “a colossal act of curiosity, of imagination and of love”; Salman Rushdie called it “A wonderfully rich, ambitious novel”; the Los Angeles Times announced that with it, Jeffrey Eugenides “emerged as the great American writer that many of us suspected him of being.”

Jeffrey Eugenides’ fiction has appeared in The New Yorker, The Paris Review, The Yale Review, Best American Short Stories, The Gettysburg Review, and Granta. He lives in Berlin, Germany, with his wife and daughter. His forthcoming projects include a book of short stories and a non-fiction guide to Berlin.