Articoli correlati a Authorship and Audience: Literary Performance in the...

Authorship and Audience: Literary Performance in the American Renaissance 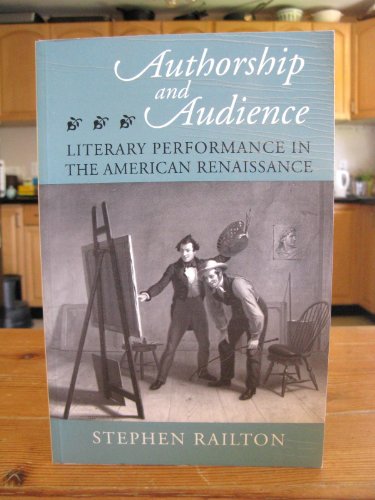 Stephen Railton's study of the American Renaissance proposes a fresh way of conceiving the writer as a performing artist and the text as an enactment of the drama of its own performance. Railton focuses on how major prose works of the period are preoccupied with their readers--how they seek to negotiate the conflicted space between the authors, who brought to the act of publication their own anxieties of ambition and identity, and the contemporary American reading public, which, as a growing mass audience in a democracy, had acquired an unprecedented authority over the terms of literary performance. New readings of Emerson's orations, Poe's tales, the sketches of the Southwest Humorists,Walden, Uncle Tom's Cabin, The Scarlet Letter, and Moby-Dick relocate American writers in the dramatic context in which they suffered and thrived. The book attends closely to historicist issues, arguing that one of the most profound ways that the culture shaped these texts was also the most immediate--as the audience each writer had to address. Equally concerned with biographical themes, it appreciates each of the major works within the larger pattern of the writer's public career and private needs.

The Princeton Legacy Library uses the latest print-on-demand technology to again make available previously out-of-print books from the distinguished backlist of Princeton University Press. These paperback editions preserve the original texts of these important books while presenting them in durable paperback editions. The goal of the Princeton Legacy Library is to vastly increase access to the rich scholarly heritage found in the thousands of books published by Princeton University Press since its founding in 1905.