Articoli correlati a The Color of Ivory: Polychromy on Byzantine Ivories

The Color of Ivory: Polychromy on Byzantine Ivories 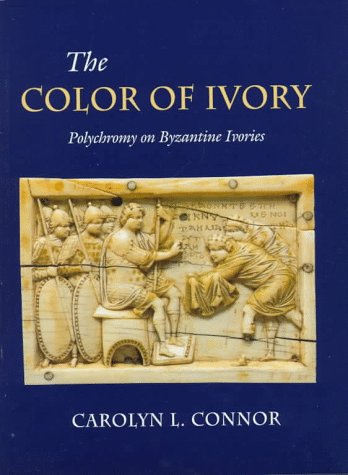 Carolyn Connor shows here that Byzantine ivory carvings--often assumed to have been monochromatic--were originally brightly colored. Most ivories today show no obvious traces of paint or stain, and many scholars believe that the Byzantines preferred the aesthetic of ivory's natural, creamy color. However, Connor's close examination of one hundred Late Antique and Byzantine ivories reveals that artists frequently colored ivories in bright hues of red, blue, green, and gold.

Intrigued by barely visible traces of paint or stain, Connor subjected such ivory objects as boxes, plaques, and book covers to scientific analysis. Under the microscope, she saw that their surfaces were once ablaze with color, while tests identified the actual pigments. Her findings, presented here, demonstrate that the ivories were colored and that the paint or stain--which does not adhere well to the surface of ivory--either wore off or was cleaned away. She draws on the work of archaeologists, classicists, historians, and art historians to show that this color was almost certainly original and not, as many scholars have assumed, a medieval or later addition. The author also locates Byzantine ivories within a long tradition of colored ivory going back, for example, to a painted chest found in the tomb of the Egyptian boy-king Tutankhamen. Connor's close study and contextualizing of a significant group of ivories will reshape our thinking about color, culture, and art.

"The debate about whether medieval ivories might originally have been coloured has been a long-running one. Since
Winckelmann, the ideal of purity has been intrinsic to the appreciation of much sculpture, above all to the study of ivory, which
has a colour of its own and a beauty of material appreciated for its grain and gloss. Carolyn Connor's book, a survey of the
results of her Byzantine ivories project, deals with the issue conclusively. She proves finally that late antique and Byzantine
ivories were painted and gilded and thus effectively silences this dispute . . . Connor's book is significant in answering the
polychromy question. It provides the first important step towards a reassessment of the aesthetics of Byzantine colour
perception and reveals the need for much more analysis and discussion."--Burlington Magazine

1. The Color of Ivory

2. The Color of Ivory

3. The Color of Ivory