Articoli correlati a American Crucible: Race and Nation in the Twentieth...

American Crucible: Race and Nation in the Twentieth Century 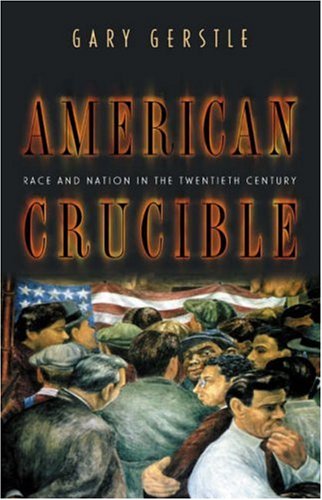 Race, citizenship, and identity form the basis of this sweeping history of America that asks which ethnic groups have thrived in the U.S. and why.

Winner of the 2002 Theodore Saloutos Memorial Book Award
"This informed and well-argued study is a strong addition to the literature on race, multiculturalism, and citizenship in the U.S . . . Gerstle [has] in this engrossing, powerfully argued study . . . a meticulous eye for detail."--Publishers Weekly

"This tightly argued historical synthesis is likely to be . . . influential to understanding the evolution of American nationalism in the past 100 years."--Library Journal

"American Crucible is an illuminating addition to what has become a vibrant academic cottage industry, the study of nationalism. . . . [A] confident and elegantly written narrative."--John T. McGreevy, Chicago Tribune

"A fresh and accessible book that fully examines [a] fundamental American paradox. He has credibly and fascinatingly, traced the odd mixture of high ideals and base doubts that shaped race and immigration policy over the last century."--Joseph Dolman, The New Leader

"The most probing and thought-provoking history of American nationalism ever written."--James Green, The Boston Globe

"Gerstle straddles the Old and the New Left, and this gives him a perspective that frequently makes for a fertile and unpredictable analysis."--Peter Skerry, National Journal

"The publication of this book could not be more timely. The first eighty pages should be compulsory reading for anybody in the United Kingdom (and elsewhere) involved with immigrants or asylum-seekers, whether at the level of policy-making, policy administration, or merely as citizen hosts."--Jim Potter, Times Literary Supplement

"A brilliant interpretation of how ideas about race and national identity have defined the US in the 20th century. . . . Engagingly written, wearing its historical learning lightly and combining pertinent cultural examples with political events, American Crucible is a work of profound historical originality and political significance that confirms Gerstle as the doyen among historians of Americanism."--Desmond King, Times Higher Educational Supplement

"[An] exemplary analysis.. . . Thanks to American Crucible, the nature of [the] complexities, contradictions, and burdens [of nationalism] are made clear."--Susan Curtis, American Nationalism

"Historians and social scientists have been longing for ambitious syntheses that take into account recent contributions to social history and studies of culture while reinvigorating key themes in political history. This book's rich and learned assessment of the complexities of twentieth-century America and its appraisal of change provide just such a powerful diagnostic and temporal framework. Showing how civic and racial ideals have entwined to produce both expansive and restrictive results, American Crucible is thoughtfully instructive and lovely to read."--Ira Katznelson, Ruggles Professor of Political Science and History, Columbia University.

"Fifty years ago, prominent historians celebrated the virtues of the 'American Creed' thirty years ago, their successors deplored the evils of 'Amerikka.' The best contemporary historians transcend these stereotypes by analyzing the many facets of Americanism, and American Crucible now sets the standard for the others. Its demonstration of how civic nationalism and racial nationalism change and how they change each other, its smooth movement from high diplomacy to comic strips, its refusal to settle for easy condemnation or celebration-together they add up to a terrific achievement."--Jennifer Hochschild, Harvard University

"In American Crucible, Gary Gerstle traces the fundamental tension between the American belief in equality and the deeply rooted tradition of racial nationalism-the most significant and most sustained conflict throughout the history of the United States. Gerstle's angle of vision allows him to illuminate and place in larger context such seemingly diverse events and developments as World War I and multiculturalism, immigration policy and the Christian right, Teddy Roosevelt's reform agenda and the social upheavals of the 1960s. American Crucible provides invaluable insight into the shape and structure of contemporary American society through its unique exploration of the nation's past."--Thomas Byrne Edsall, Washington Post

"This work confirms Gary Gerstle's stature as one of our most imaginative and ambitious historians. His scholarship substantially redefines the meaning of key ideas about the twentieth-century United States and its culture, including ethnicity, citizenship, patriotism, and Americanism. Gerstle's capacity for revisionism, synthesis, and engaged writing reminds me of Richard Hofstadter, C. Van Woodword, and Warren Sussman. With this book, he enters their league."--Nelson Lichtenstein, University of California, Santa Barbara

"This is one of those rare works of political and cultural history that compel us to rethink the nature and evolution of American society as a whole."--Michael Kazin, Georgetown University

"A bold, provocative, and often disturbing book about the contest between racial and civic definitions of American nationhood. Rarely has a work of scholarship examined the history of racism and exclusion in such comprehensive and dismaying detail, or in such clear and persuasive prose. Gerstle also contributes to the growing interest among historians in the concept of 'whiteness' by closely examining changing views of white ethnicity in the twentieth century. American Crucible is an important and impressive book and a major contribution to our understanding of twentieth-century America."--Alan Brinkley, Columbia University

"American Crucible dramatically portrays the century just past as one in which the United States saw inclusive traditions of civic nationalism compete with and partake of exclusionary racial nationalist traditions. Meticulous research and deep reflection prevent Gerstle from portraying either nationalism as the 'real' American way. The tension between the two and between the author's sober analysis and his strong personal advocacy of civic nationalism produces a remarkable study. Organized accessi

1. American Crucible: Race and Nation in the Twentieth Century.

2. American Crucible: Race and Nation in the Twentieth Century.

3. American Crucible: Race and Nation in the Twentieth Century.

4. American Crucible: Race and Nation in the Twentieth Century.

5. American Crucible: Race and Nation in the Twentieth Century.

7. American Crucible: Race and Nation in the Twentieth Century.