Articoli correlati a Journey from the Center of the Sun

Zirker, Jack B. Journey from the Center of the Sun

Journey from the Center of the Sun 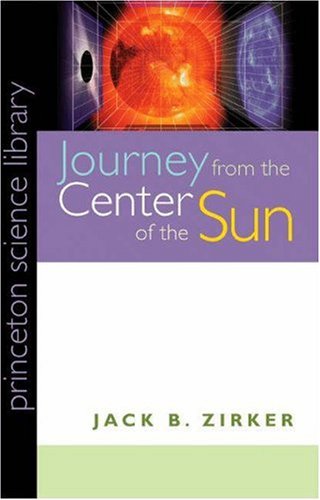 Jack Zirker takes us on an imaginary voyage from the center of the sun to its surface, showing us how sunlight is made and finally following the sun's energy to the far reaches of the solar system. Along the way, he introduces the basic processes at work in our nearest star and the exciting answers solar scientists are finding to problems that have long perplexed astronomers.

Journey from the Center of the Sun describes how theory and practice are coming together to provide a new understanding of this old star. At this moment, solar physicists are collecting the best observations ever obtained about the sun's interior and dynamic atmosphere, while a new breed of theorists is interpreting these data using computer simulations. Zirker reports on cutting-edge advances and looks at the tough questions solar physicists are beginning to crack. How can we account for the solar wind that causes the sun to lose mass at an astonishing rate? Where have all the neutrinos gone? How does the sun generate magnetic sunspots, and why does it have a sunspot cycle? What causes a solar flare to explode? How does the sun affect the earth's climate? What is a sunquake?

For the armchair astronomer or the student of astrophysics, this book provides an unusually complete picture of solar physics today.

"[Zirker's] informal style keeps things moving along swiftly, while balancing the latest findings with background on the pioneers of the field. He shows how solar research has grown from inspired speculation into a flourishing science. A thorough introduction."--Ben Longstaff, New Scientist

"Journey from the Center of the Sun is written with the experience, perspective, and insight of one who has spent decades in solar physics. . . . Zirker sets out to deal with it all, and does an admirable job. He fits the many pieces together in an eminently satisfying manner. . . . At such a reasonable price, Journey from the Center of the Sun should be purchased and read by anyone with an interest in solar astrophysics."--Loren W. Acton, Physics Today

"The book's title amounts to an outline. But before jumping in, Zirker gives readers a basic overview of the Sun's structure to frame the rest. This is followed by a summary of major unsolved solar problems, many of them longstanding. . . . Then it's down to the solar engine room: the core, where thermonuclear reactions make everything go. Zirker provides a detailed description of hoe the Sun works. At times he will tell about unfamiliar processes, such as quantum tunneling as protons collide, but his explanations are clear."--Robert Burnham, Sky & Telescope

Jack B. Zirker is Astronomer Emeritus and former Director of the National Solar Observatory.

Journey from the Center of the Sun (Princeton Science Library)

Journey from the Center of the Sun (Princeton Science Library) Zirker, Jack B.