Articoli correlati a The Dead Sea Scrolls: A Biography

The Dead Sea Scrolls: A Biography 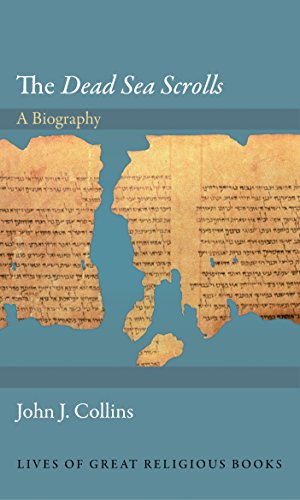 Since they were first discovered in the caves at Qumran in 1947, the Dead Sea Scrolls have aroused more fascination--and more controversy--than perhaps any other archaeological find. They appear to have been hidden in the Judean desert by the Essenes, a Jewish sect that existed around the time of Jesus, and they continue to inspire veneration and conspiracy theories to this day. John Collins tells the story of the bitter conflicts that have swirled around the scrolls since their startling discovery, and sheds light on their true significance for Jewish and Christian history.

Collins vividly recounts how a Bedouin shepherd went searching for a lost goat and found the scrolls instead. He offers insight into debates over whether the Essenes were an authentic Jewish sect and explains why such questions are critical to our understanding of ancient Judaism and to Jewish identity. Collins explores whether the scrolls were indeed the property of an isolated, quasi-monastic community living at Qumran, or whether they more broadly reflect the Judaism of their time. And he unravels the impassioned disputes surrounding the scrolls and Christianity. Do they anticipate the early church? Do they undermine the credibility of the Christian faith? Collins also looks at attempts to "reclaim" the scrolls for Judaism after the full corpus became available in the 1990s, and at how the decades-long delay in publishing the scrolls gave rise to sensational claims and conspiracy theories.

"One could scarcely imagine a better concise guide to the Scrolls that John Collins's The Dead Sea Scrolls: A Biograohy. Collins, who teaches at Yale, writes with clarity and liveliness, and throughout his account exercises great judiciousness, a quality that has not always been prominent in discussions of this subject." --Robert Alter, London Review of Books

"This compact book, part of the Lives of Great Religious Books series, is not so much about what the Dead Sea Scrolls are but, rather, how the arguments around them have impacted Christianity, Judaism, and the wider world. Collins writes engagingly about the history of the Scrolls and examines the debates and conclusions that various scholars have put forth about who wrote the Scrolls, what the location of their discovery means, and the way the wide-ranging writings have been used to promote various positions. . . . A solid introduction that offers plenty of information." --Ilene Cooper, Booklist

"This is a very readable description of Dead Sea Scrolls' story, from their discovery at an archaeological site in the West Bank to recent events inspired by them." --Devorah Bennu, GrrlScentist

"[Collins] brings clarity and acuity to a subject that has often attracted myth-makers and special pleaders. . . . [He] also allows us to see that the acrimonious debates about the origin, meaning and significance of the Dead Sea Scrolls are actually quite consequential to any reader who wonders how the Bible itself and the Bible-based religions actually entered the world." --Jonathan Kirsch, Jewish Journal

"Offers insights into the passionate debates that have swirled around [the Dead Sea Scrolls] since their startling discovery. One of the topics he explores is the extent to which they broadly reflect the Judaism of that era." --Sheldon Kirshner, Canadian Jewish News

"In his short, sharp, snappy 'biography', [Collins] rehearses all the various theories on the scrolls, separates the wheat from the chaff, and brings light to the darkness. This is not simply a digest. Collins takes our hand and guides us to oh-so-reasonable conclusions." --Peter Stanford, The Independent

"The scrolls have had the experts fighting over them like cats in a sack, but for the rest of us, they are of curiosity value only. . . . These stories of backbiting and backstabbing make Collin's book a feast for the eyes." --Nigel Nelson, Tribune (U.K.)

" The Dead Sea Scrolls: A Biography is an important contribution because Collins analyzes and summarizes the essence, content and problematic aspects of the Dead Sea Scrolls and their scholars. . . . In today's politicized world of academia, unfortunately, the Jewish context and content of the Scrolls and the site and the Jewish world of Jesus and his disciples must be restated and demonstrated constantly. Accordingly, John Collins' book contributes to debunking fraudulent political claims against the presence of Jews and the very essence of Jewish history and Jewish religion in the Land of Israel." --Rivkah Fishman-Duker, Scholars for Peace in the Middle East

"Collins writes in a clear and precise style. . . . Here he addresses the different interpretations presented by scholars, providing a good summary of historical debate about the Scrolls." --Choice

"This series contains the latest scholarship about a specific subject, gives great opportunity for acquiring a limited but significant amount of knowledge, and enthuses readers to go into it in much more detail." --Charles H. Middleburgh, Charles Middleburgh Blog

"In sum, this is an excellent introduction to a complex subject, lucid and remarkably irenic." --Roger S. Bagnall, Bryn Mawr Classical Review