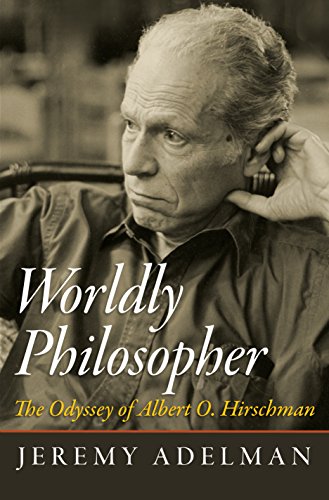 Worldly Philosopher chronicles the times and writings of Albert O. Hirschman, one of the twentieth century's most original and provocative thinkers. In this gripping biography, Jeremy Adelman tells the story of a man shaped by modern horrors and hopes, a worldly intellectual who fought for and wrote in defense of the values of tolerance and change. This is the first major account of Hirschman’s remarkable life, and a tale of the twentieth century as seen through the story of an astute and passionate observer. Adelman’s riveting narrative traces how Hirschman’s personal experiences shaped his unique intellectual perspective, and how his enduring legacy is one of hope, open-mindedness, and practical idealism.

Winner of the 2014 Joseph J. Spengler Best Book Prize, History of Economics Society
One of Bloomberg/Businessweek Best Books of 2013, selected by Ollie Rehn
One of Financial Times (Alphachat)'s Econ Books of the Year for 2013
One of The Guardian Best Books of 2013, chosen by Malcolm Gladwell
Honorable Mention for the 2013 PROSE Award in Biography & Autobiography, Association of American Publishers

"[A] biography worthy of the man. Adelman brilliantly and beautifully brings Hirschman to life, giving us an unforgettable portrait of one of the twentieth century's most extraordinary intellectuals. . . . [M]agnificent." --Malcolm Gladwell, New Yorker

"[An] astonishing and moving biography. . . . Hirschman's work is more than interesting enough to justify a book (or two, or ten), but Adelman's achievement is to demonstrate, in novelistic detail, that he also lived an astounding life, full of narrow paths and ridiculously improbable twists and turns." --Cass Sunstein, New York Review of Books

"[T]he winner [ Enlightened Economist prize this year] is Jeremy Adelman's The Worldly Philosopher, a biography of Albert Hirschman. Hirschman's life story is extraordinary, and his early years make for a gripping tale. What I particularly enjoyed, though, was the portrait of an economist whose economics had a context in the realities of the countries Hirschman studied, their history and politics and culture, and in his wide reading in philosophy and other subjects. . . . A worthy winner--congratulations to Professor Adelman!" --Diane Coyle, Enlightened Economist

"This is the book I have looked forward to most all year and so far it does not disappoint." --Tyler Cowen, Marginal Revolution

"Adelman's engrossing biography illustrates how Hirschman's global background, natural linguistic ability, education, and worldly experiences shaped his thoughts and enabled his thinking 'outside the box' to arrive at original and often provocative ideas. . . . Hirschman's story will appeal to many general readers, but especially to economists." --Library Journal

" Worldly Philosopher will be the definitive work on Hirschman for some time. . . . If you liked Edmund de Waal's The Hare with Amber Eyes, you will find Adelman's story of Hirschman's early life riveting--a book-club quality read. . . . Worldly Philosopher is a prodigious piece of research, lovingly told and immensely worthwhile for the new light it sheds on the odyssey of a writer whose small ideas add up to major insights." --Robert Kuttner, American Prospect

"Adelman's biography does a thorough job in shedding light not just on the academic and intellectual prowess of the great thinker, but also in informing the reader about the man whose life away from the intellectual world exhibited the same milieu of refreshing variety." --Prashanth Perumal, Mint

"[T]he only official biography of one of our generation's most extraordinary thinkers." --City Book Review

"Jeremy Adelman's outstanding biography . . . should receive serious attention from prize committees when the best non-fiction works of 2013 are chosen. . . . As Adelman makes eloquently clear, Hirschman . . . was a great deal more than an economist or social scientist." --Stuart Mitchner, Princeton Magazine

"[I]t is thanks only to this remarkable biography by Jeremy Adelman . . . that we now have the first comprehensive view of the man and his work. Adelman writes with affection and respect and chronicles Hirschman's life through painstaking archival work, extensive interviews, and the examination of personal and professional papers. He brings the work alive by exploring the origins of Hirschman's achievements in the twists and turns of his life--a life, Adelman notes, that 'was a personal history of the twentieth century.'. . . [T]hanks to Adelman's magisterial biography, we can see how Hirschman's social science was informed and strengthened by his deeply moral and principled politics." --Seyla Benhabib, Democracy

"Economics, philosophy, and more than 700 pages--oh my! That's one way to view Adelman's brilliant biography of economist-philosopher Albert O. Hirschman (1915-2012). But like Hirschman himself, who took a skewed and often inventive look at nearly everything, there are many ways to describe and delight in this book. . . . Adelman sensitively draws out this enlightening and heartening life, sketching in, along the way, the characters surrounding Hirschman. His wife, Sarah, was part of Hirschman's odyssey, and Adelman portrays her as not only capable but a smart, brave, discerning, and interesting person. Hirschman's primary field was economics, but he eschewed formulaic solutions to human problems, choosing instead aphoristic thinking and petites idées, as 'small things could provide big insights' (and throughout, wordsmith Adelman perceptively and astutely serves wordsmith Hirschman). Nearly every page of this book inspires thought or admiration or fear for the outcome or exultation at the revelations. . . . A bright world of thought and viable enterprise opens before readers--including, perhaps especially, noneconomists--and it should not be missed." --Eloise Kinney, Booklist

"Examining the life of a great intellectual living in extraordinary times, Jeremy Adelman has produced a special kind of biography. . . . Adelman beautifully captures Hirschman's intellectual temperament, not only by describing it but also by crafting a book that recapitulates it. Worldly Philosopher is a book of rhymes, in which Hirschman's writing recalls his personal experience, early and late projects betray enduring habits of mind, and Adelman's own judgment and style bear traces of his subject's. . . . Adelman's proximity to Hirschman allows him to interpret a public record that is extensive but opaque, and the resulting book is a sympathetic, internal account of a life complex enough to profit from such treatment. For anyone who knows one part of Hirschman's life, the book opens entire worlds. For anyone who has pored over his cryptic papers, Adelman's mastery of them is revelatory. Worldly Philosopher not only explains Hirschman from the inside out, it gives the reader a taste of his style as a writer: his eye for beauty, love of literature, and sheer range. . . . Worldly Philosopher is, as promised, a sweeping history of the world, and a highly personal one." --Amy C. Offner, Public Books

"Adelman provides a masterful biography of one of the most remarkable economists of the 20th century, Albert O. Hirschman. Any one of Hirschman's many lives would provide ample fodder for an interesting book. . . . [ Worldly Philosopher] is obviously a labor of love, in which Adelman painstakingly reconstructs Hirschman's private and intellectual life." --Choice

" Worldly Philosopher is a major contribution to our understanding of the history of twentieth-century social science, and a sympathetic tribute to a man who struggled against personal adversity and who strove to improve the opportunities of ordinary people to live successfully in the face of massive adversity." --Bryan S. Turner, Sociological Review

"This is a wonderful book about a superb political economist. Adelman invested many years in this admiring biography, which allows readers to fully appreciate the diversity of Albert Hirschman's many contributions to economic scholarship. . . . Hirschman possessed a unique ability to shift from the particular to the general and projected an implicit optimism about humanity's prospects." --Albert Fishlow, Foreign Affairs

"Adelman's richly detailed and highly readable biography provides a valuable introduction to the life and work of a scholar who was unmoved by the proclivity of economists and other social scientists to draw sweeping conclusions from simplified assumptions." --Michael McPherson, Journal of Economic Literature

"This is the first major account of Hirschman's remarkable life, and a tale of the twentieth century as seen through the story of an astute and passionate observer. Adelman's riveting narrative traces how Hirschman's personal experiences shaped his unique intellectual perspective, and how his enduring legacy is one of hope, open-mindedness, and practical idealism." --World Book Industry

"In Worldly Philosopher, Jeremy Adelman offers a brilliant--and brilliantly detailed--portrait of Hirschman, making a convincing case for his place among the giants of twentieth-century social science. After reading Adelman's biography, one is hard pressed to come up with a social scientist who led a richer, fuller, or more meaningful life." --Peter A. Coclanis, HAHR

"This is a good book from many different stand points. . . . Many readers will find Worldly Philosopher to be longer than it needs to be, although they would presumably give conflicting opinions about what ought to have been cut, depending on whether they were interested in the book mainly as a summary of Hirschman's ideas, as the life story of a fascinating person, or as a discussion of changing tendencies in modern intellectual, political, and economic life. The book is all of these things and well worth reading for any of them." --Woodruff D. Smith, American Historical Review

"Jeremy Adelman has written a wonderful book, one worthy of its subject and that is high praise. . . . Adelman demonstrates the importance of situating an author sociologically as well as historically in his times, of understanding the practical experience--including the experience of research--that gave rise to his ideas, and more generally grasping the relationship between his work and the rest of his life. . . . The beauty of this book is that Albert Hirschman comes alive as a man and an author." --Craig Calhoun, Contemporary Sociology

" Worldly Philosopher is an outstanding literary achievement that provides insight into the life of one of the twentieth century's most important social scientists. Jeremy Adelman tells his story in an entertaining and compelling style. In conjunction with The Essential Hirschman, it should go some way toward ensuring that Hirschman's ideas continue to be discussed throughout the twenty-first century." --Adrian Walsh, Australian Book Review

"Adelman's lengthy life of Hirschman is intrinsically interesting to anyone concerned with the twentieth century in Europe and the Americas." --Robert W. Frizzell, Yearbook of German Studies

"This beautifully written biography of German-born economist Albert O. Hirschman is well worth reading for its insights into a man who experienced the political events that gave birth to today's world, saw the flawed ideologies that got us to where we are now, and saw how to identify and avoid those ideologies that might lead us astray in the future." --William J. Bernstein, Financial Analyst Journal

" Worldly Philosopher is beautifully written and is well worth reading as the biography of a man who experienced, as fully as anyone could, the political events that gave birth to today's world and who saw, as clearly as anyone could, the flawed ideologies that got us to where we are now--and, most critically, saw how to identify and avoid those ideologies that might lead us astray in the future." --William J. Bernstein, Enterprising Investor

Jeremy Adelman is the Walter Samuel Carpenter III Professor of Spanish Civilization and Culture and director of the Council for International Teaching and Research at Princeton University. His books include Worlds Together, Worlds Apart: A History of the World and Sovereignty and Revolution in the Iberian Atlantic (Princeton).