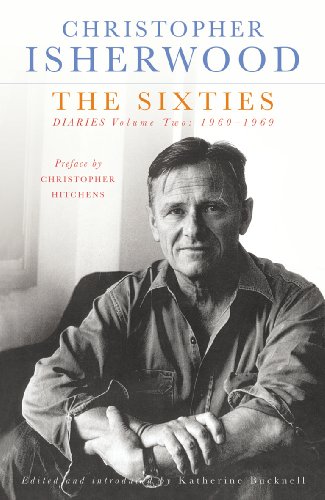 This second volume of Christopher Isherwood's remarkable diaries opens on his fifty-sixth birthday as the fifties give way to the decade of social and sexual revolution. Isherwood takes the reader from the bohemian sunshine of Southern California to a London finally swinging free of post-war gloom, to the racy cosmopolitanism of New York, and the raw Australian outback. He charts his ongoing quest for spiritual certainty under the guidance of his Hindu guru, and reveals in reckless detail the emotional drama of his love for the American painter Don Bachardy, thirty years his junior and struggling to establish his own artistic identity.
The diaries are crammed with wicked gossip and probing psychological insights about the cultural icons of the time - Francis Bacon, Richard Burton, Leslie Caron, Marianne Faithfull, David Hockney, Mick Jagger, Hope Lange, W. Somerset Maugham, John Osborne, Vanessa Redgrave, Tony Richardson, David O. Selznick, Igor Stravinsky, Gore Vidal, and many others. They are most revealing about Isherwood himself - his fiction (including A Single Man and Down There on a Visit), his film writing, his college teaching, and his affairs of the heart. He moves easily from Beckett to Brando, from arthritis to aggression, from Tennessee Williams to foot powder, from the opening of Cabaret on Broadway (which he skipped) to a close analysis of Gide.
In the background run references to the political and historical events of the period: the anxieties of the Cold War, Yuri Gagarin's space flight, De Gaulle and Algeria, the eruption of violence in America's inner cities, the Vietnam War, the Summer of Love, the moon landing, and the raising and lowering of hemlines. Isherwood is well known for his prophetic portraits of a morally bankrupt Europe on the eve of World War II; in this unparalleled chronicle, The Sixties, he turns his fearless eye on the decade which more than any other has shaped the way we live now.

"Christopher Isherwood continues to perform open-heart surgery on himself, without anaesthestic, and with one beady eye on the audience...a rare treat" (Ian Samson Guardian)

A great writer nails the sixties, from California to swinging London, in his fearless, insightful diaries - with a preface by Christopher Hitchens.