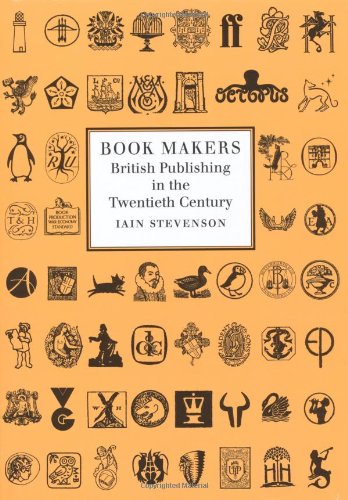 Book Makers presents an absorbing insider account of the changing environment of British book publishing during the twentieth century. Iain Stevenson has worked for some of Britain’s most well-known publishers, and he uses his personal experience to accurately detail how the industry grew from a small elite trade to a world-class business with enormous cultural influence.

Organized chronologically by decade, Book Makers considers not only fiction and general trade publishing, but also academic, scientific, children’s, technical, and professional publishing. Stevenson profiles many key figures in the industry, such as educational publisher William Heinemann; Jonathan Cape, publisher of Ian Fleming’s James Bond series; Allen Lane, founder of Penguin Books; Paul Hamlyn; and media mogul Robert Maxwell. The result is a fascinating tale of creative genius, individual endeavor, occasional subterfuge, and futuristic vision that over the century has made British book publishing incredibly successful—and that continues to further its central role today. Enlivened with Stevenson’s spirited anecdotes about his experiences,Book Makers will be entertaining reading for anyone concerned with the history of publishing and the future of the book.

Iain Stevenson is professor of publishing at University College, London. He has worked in publishing for over thirty years at such publishers as Longman, Macmillan, and Wiley, and he was on the Council of the Publishers Association. He founded the environmental publisher Belhaven Press, and his current research is centered upon the application of new technology in publishing.