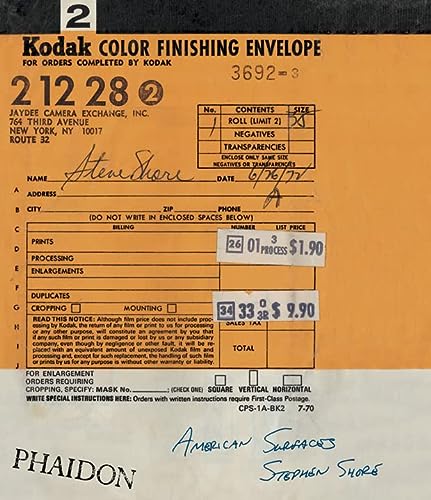 American Surfaces, Stephen Shore's largely unpublished series of photographs from 1972-3, took documentary photography to a new level. When first exhibited at the Light Gallery in New York this visual diary of Shore's travels across the United States confounded critics. Displayed as hundreds and hundreds of colour photographs, processed simply at Kodak's labs in New Jersey, they were a stark contrast to the formal, black-and-white prints that were recognized as art photography at the time.
Despite its unfavourable reviews, the show was bought in its entirety by Weston Naef, then Curator of Photography at the Metropolitan Museum in New York, where 220 of the photographs now reside. American Surfaces has since become the benchmark for documenting our fast-living, consumer-orientated world, a body of work that followed on from Walker Evans and Robert Frank's experiences of crossing the United States and which continues to influence photographers today.
This book brings together the largest selection of images yet published from the series and is the first time they have been sequenced in the order in which they were taken. American Surfaces follows Shore's extraordinary journey, travelling first into the deep South before taking Route 66 from Flagstaff to Chicago, and returning home to New York to continue his visual diary in his home city.